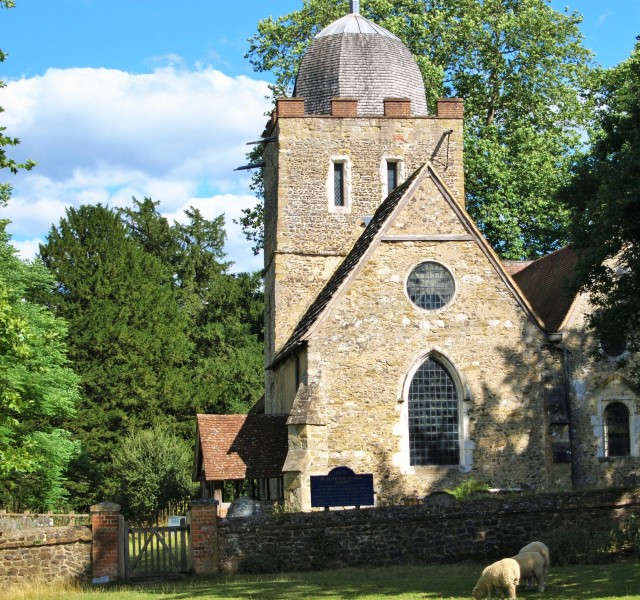 The main picture shows the Old Church of St Peter and St Paul from the west, set amongst the trees of Albury Park. The church dates from the Saxon era, and has some pre-conquest masonry in the tower at lower level. The proportions and style of the nave suggest that this was also of Saxon build. Between 1140 and 1150, the tower was extended outward at ground floor level by thickening the walls to almost 4 feet. It was extended upwards at the same time, forming 3 stages, before the brick battlements and wood shingled cupola were added c1820.
The chancel was added c1280 and the south transept c1300. The north door was inserted around 1330, and is of oak with original strap hinges, oak lock case and foot long key. The door is approached through a finely carved and moulded timber porch dating from 1480.
The first photograph in the gallery above shows the wall of the south aisle with a remarkably well preserved mural of St Christopher over the south door. The painting dates from c1480.
The next picture is of the late 13th century chancel, which was much altered during the 16th century, and was re-roofed sometime after the church was listed in 1967.
The third photograph shows a floor brass which is in the south aisle, and commemorates one John Weston who died in 1440.
This ancient Saxon church was the parish church of the village of Albury until 1782, when the manorial estate came into the hands of the Honourable William Clement Finch. This ‘gentleman’ proceeded to enclose the village green, and annexe part of the churchyard. He also started a policy of harassment of the Albury villagers to such an extent that over time they moved away to the nearby Weston Street hamlet, which later became known as Albury.
In 1819 the manorial estate was bought by Henry Drummond, senior partner in Drummonds Bank, (founded by his grandfather),  Member of Parliament and philanthropist. By this time the old church was becoming dilapidated, although the Albury villagers still worshipped there.
In 1839 Henry Drummond was granted permission by the Bishop of Winchester to build a new Parish Church at Weston Street, and to close the old church. He was then responsible for renovating and altering the south transept of the now former parish church to create the Drummond Mortuary Chapel. Drummond commissioned leading English architect Augustus Pugin to design the new chapel. Having first replaced the roof with one of steeper pitch and raised a section of the floor to create a position for an altar-tomb, Pugin proceeded to embellish the new roof panels and walls with designs in the predominately ‘royal blue of heaven’.New stained glass was installed to add to the overall effect.
The final photograph shows the south window of Drummonds Chapel. The decorated roof panels have a central cartouche with the sacred monogram of ‘Him who reigns therein’.
The Old Church of Albury is now under the care of the Churches Conservation Trust.
.