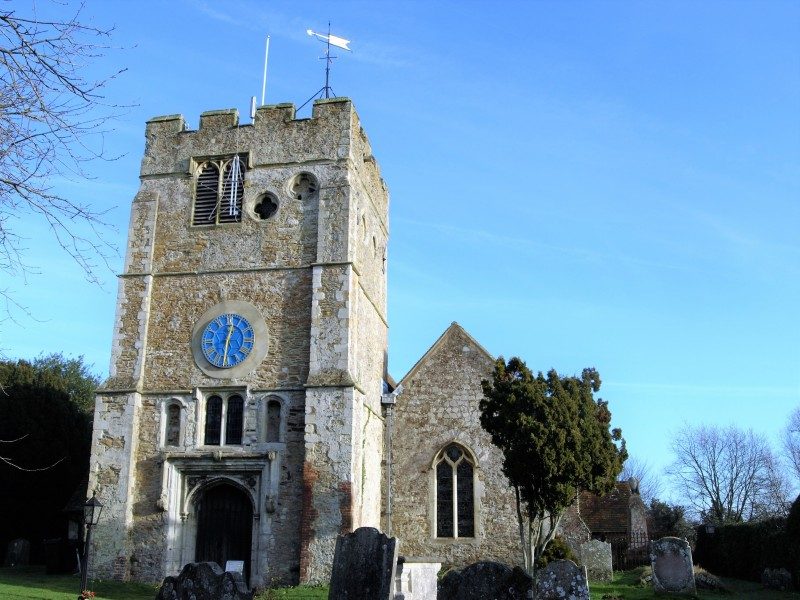 Standing on slightly elevated ground just north of the Royal Military Canal, the church of St Peter and St Paul is largely Perpendicular in style, having been rebuilt after it was burnt by the French in 1380. Nothing of the original church mentioned in the Domesday Book now exists, but the 13th century tower and the north chapel did survive the French raid. The north chapel may well date from the 12th century, when it was, probably, a small detached chapel in its own right. It subsequently became the north chapel of the larger building, and has since had various uses including schoolroom, vestry and organ chamber. In 1986,  after archaeological investigations, the organ was replaced in the western half of the chapel and the fine sanctuary section  restored, complete with its own altar.
When the church was rebuilt, the north aisle was incorporated into the nave, with the roof tie-beams, which carry crown posts, spanning across from the north wall to the south aisle arcade.
The first photograph in the gallery below shows the Perpendicular Gothic style west doorway. The outer drip moulding has carved stops depicting angels with shields, and, along the top drip, three shields featuring, from left to right, a cross, French and English quartered arms, and the arms of Archbishop Warham. William Warham was Archbishop of Canterbury from 1503 to 1532, dating the doorway to the early 16th century.
Next shown is the octagonal font which dates from the 15th century. The lower part of the bowl has carvings, including a shield with crossed keys, the symbol of St Peter, and one with two swords, the symbol of St Paul.
The third photograph is of the very unusual holy water stoup with triple foliate head. It is probably contemporary with the 13th century tower.
The fourth picture shows the south wall of the south chapel. Below the 3-light window, which has stained glass that includes a kneeling figure and various coats of arms, is an altar tomb with Bethersden  marble top. Over the tomb is a wide arch with five trefoil detailing and a quatrefoil at each end piercing the arch and framing a carved ecclesiastic’s head. There is no effigy on the marble slab, nor any inscription. To the left of the tomb is an ogee-headed piscina with a stone credence shelf.
Next pictured is the north side of the nave, looking towards the organ in the west end of the north chapel.
Finally in this gallery is a photograph of medieval floor tiles which were discovered during renovations in the 19th century and re-positioned in the corner of the south chapel.
A feature of St Peter and St Paul, Appledore is the fine stained glass which includes sections of ancient glass alongside some beautiful modern designs. The gallery below shows some of the windows with stained glass.
The first photograph is of one of two lancet windows in the east wall of the north chapel. The one shown is of St Nicholas, the other is of St Christopher.
Next shown is a lancet in the north side of the north chapel. This was the last design of artist Edward Salkeld Burrow, and was installed in 1927 following his death. A full description is on an adjacent plaque, and is shown in the next photograph.
Next featured in the gallery is the beautiful east window which was installed in 1901. The 3-light window depicts St Paul, The Good Shepherd, and St Peter.
The fifth picture is of the south chapel east window. The centre light of this 3-light window depicts The Virgin Mary holding the Holy Child aloft, above a fine detail of ‘Healing Jairus’s daughter’.
The last photograph is of the west window which has glass depicting the Shepherd and his flock with Fairfield Church in the background. There is a rabbit in the field, and along the bottom, below the dedication, are very good depictions of birds found locally – kingfisher, lapwing, curlew, black-headed gull, and redshank.