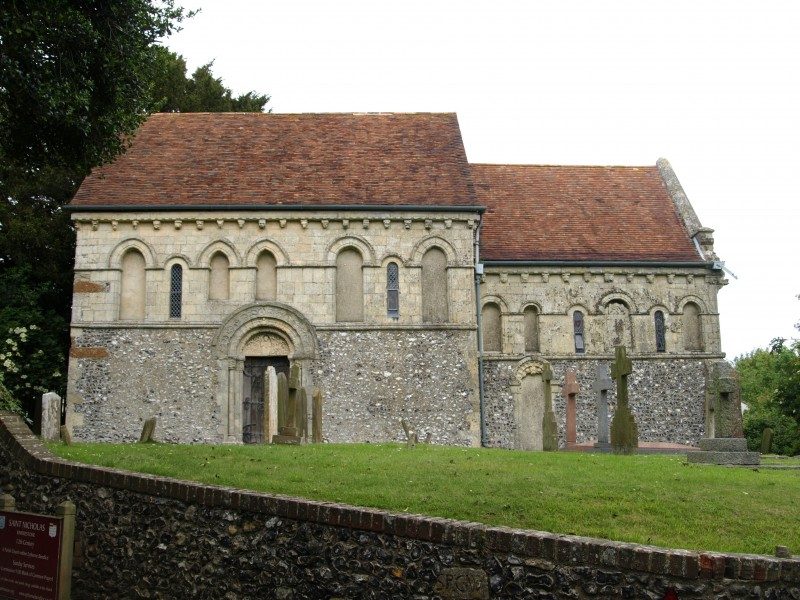 The Norman church of St Nicholas at Barfreston dates from c1180. It is one of the most important examples of late 12th century church architecture in Europe, with an amazing array of  fine intricate carvingThere is a rare Norman wheel window in the east gable end, and the south doorway is truly remarkable for the quality of the carving on the tympanum.

There are also two other Norman doorways, a fine corbel table and arcading ofalternate large and small Norman arches, the latter having lancet windows. The quality of carving is replicated inside the church.
The upper parts of the church are of Caen ashlar, above lower flint sections throughout.
The first photograph in the gallery above shows the east elevation with wheel window above a corbel table with its grotesque heads, and an arcade (a succession of arches). Below this is a blind arcade of two half round Norman arches.
Shown next is the wheel window. The spokes are colonettes with capitals of beasts’ heads, and a frieze of winged beasts and foliage.
The other pictures in the gallery are of the south doorway tympanum. This is the most celebrated section of the carvings at St Nicholas’s.
There are two sets of attached columns having carved capitals. On the right hand side are a lion and a knight on horseback, charging with lance raised. The left hand capitals are similarly richly carved with different scenes.
The tympanum itself has a centre piece of Majestas Domini (Christ in Glory), surrounded by 3 orders. The outer order is a foliated roll mould encircling sunken medallions with signs of the zodiac and the labours of the month. Inside this, the centre order has animals with musical instruments carved on a thick roll. At the top of this order is the figure of a bishop. The innermost order has another thick roll with foliate carving.

The north doorway with semi-circular arch of four orders is shown in the gallery above. The outerborder has a foliated roll mould. Next is a triple zig-zag, then a plain roll, and innermost is a decorated chevron. The doorway has ornate capitals. The second picture shows the left hand one, with a carving of a dragon eating its own tail.
The third photograph is of the former priest’s doorway in the south chancel wall. The tympanum is unfortunately damaged, but is carved with a crown head flanked by deeply cut knobs, perhaps depicting flower heads. Outside of the tympanum is a triple chevron moulding, and then a billet moulding.

St Nicholas’s has no tower, the church bell being hung outside in a yew tree and operated by an elaborate system of pulleys.

The interior of the church reflects the fine intricate carving of the exterior. All of the window arches have roll moulded surrounds, and there is a continuous sill moulding around the nave.
The chancel arch has a plain inner roll, a chevron moulding, then a triple zig-zag and an outer billet mould. Either side of the chancel arch are niches, and, over these, there is a moulded string course.
The east wall of  the chancel itself has the wheel window, which has carvings of winged beasts and foliage, as it has externally, and three lancet windows over the altar.  The left one of these is shown in the gallery above.