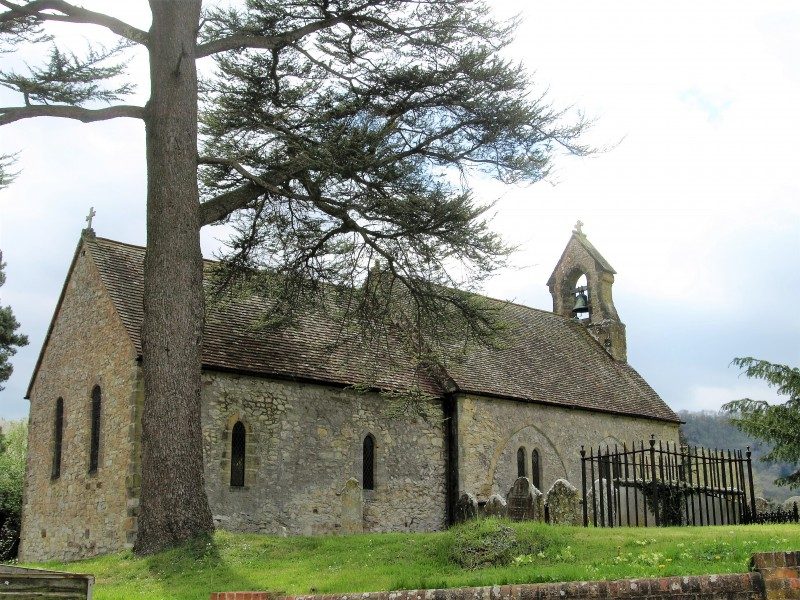 Building of the church of St Mary at Barlavington was started towards the end of the 12th century, with some Norman/Early English Transitional features, but with much Early English architecture dating from the start of the 13th century. Constructed largely of sandstone rubble, this lovely little church consisted of nave, chancel and north and south aisles, with the west gable carried up into an arch for a single bell.
There are superb views of the South Downs from the churchyard.
At some stage the north aisle was taken down and the two-bay arcade blocked. The first picture in the gallery below shows the blocked arches of the north arcade with two Early English style lancets inserted into each arch.
The second picture in the gallery above is the view from the nave, looking through the pointed Gothic chancel arch into the chancel. The east fenestration consists of two Early English lancets with stained glass, installed in 1853, and commemorating the Rev. William A Clark. The glass depicts the Crucifixion and the Risen Christ. The next photograph is a view in the opposite direction through the chancel arch, showing the 2-light west window and the crown post roof timbers in the nave.
The fourth photograph is of a splendid representation of The Annunciation which is mounted behind the altar between the two lancet windows in the east wall. The figures of the Virgin Mary and the Angel Gabriel were carved in oak by A. Ayres in 1967.
Next shown is the small Norman Transitional window in the chancel south wall.
Finally pictured is the plain octagonal font of unknown date, but perhaps re-worked or installed during Victorian restorations.