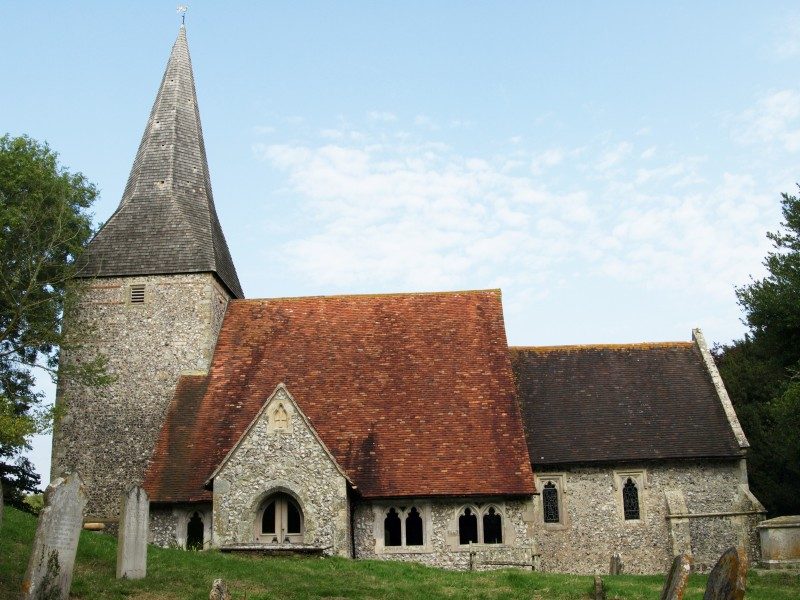 The grassy ground to the south-west of the church rises to an ancient burial mound, or barrow, indicating that the site was a sacred one even
in pre-Christian times.
The church itself was built of flint with stone dressings in the 12th century and it is Grade I listed. St Michael and All Angels is unusual in that the windows are glazed with clear plate glass, which was used following bomb damage during the Second World War, it not being considered sensible to replace the leaded windows when further bomb damage was thought to be likely.
The font is Saxon, and therefore predates the Norman church. To the right of the font, on both faces of the tower arch corner stones, are grooves, which are thought to have been made by the sharpening of arrows. (Edward III made archery compulsory after Sunday church services).

The Sedilia, a double seat to the right of the altar, used by the priest and deacon during mass, has a Sussex marble back. The back of the Easter Sepulchre, and the altar steps are also made from Sussex marble, probably reused from an earlier marble altar. Sussex Marble is a freshwater limestone found in Kent and Sussex Weald clay. It is also known as Petworth Marble, Bethersden Marble and Laughton Stone from some of the villages where it was quarried.

There is no doubt that the crowning glory of this little church are the Bloomsbury murals. These were painted during the Second World War by Vanessa Bell, her partner Duncan Grant and her son, Quentin Bell, part of a group of intellectuals who originally lived and studied together in Bloomsbury, London. Vanessa, sister of Virginia Woolfe, bought the nearby Charleston Farmhouse in 1916, and lived there until her death in 1961, aged 81. The murals include: ‘Christ in Majesty’, over the chancel arch; depictions of three local men each representing one of the three military services;’The Crucifixion’ painted by Duncan Grant in 1944; and ‘The Supper at Emmaus’ showing Jesus, risen from the dead, appearing to two of the disciples.