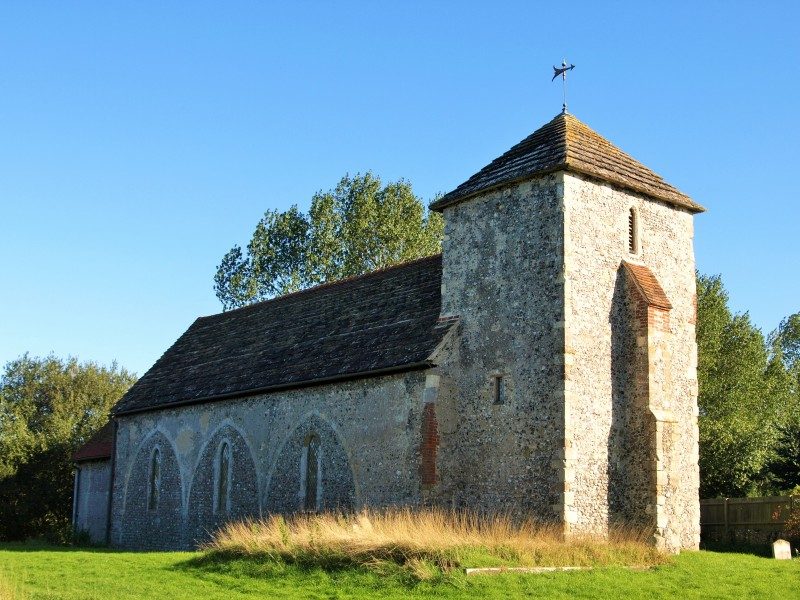 St Botolph’s church is of Saxon origin, evidenced by the long and narrow proportions of the nave, and in particular by the small round headed window at the west end of the south wall and the pronounced soffit roll of the chancel arch.
The tower was built on in the 13th century, and c1250 a north aisle was added. The aisle was demolished sometime between 1776 and 1802, after having fallen into disrepair and becoming surplus to requirements for a smaller congregation. The three blocked pointed arches of the former north aisle arcade are clearly visible on the nave north wall.

Although the nave and chancel arch are Saxon, the original Saxon chancel would have been apsidal, and was rebuilt in the early 14th century to form the current enlarged chancel.

There are wall paintings above the chancel arch, but they are rather indistinct. They are thought to be depictions of St John and the Virgin Mary with a bishop, perhaps St Peter.

Above: A 14th century window in the chancel south wall with a pointed head piscine below, also 14th century. The pulpit which retains its original tester was formerly painted blue. It is decorated with abstract incised patterns, and dates from 1630.  This date is also inscribed on the south door. The square font is quite possibly from the same date.

The Tapsel gate was fitted in 2003, and gives access to the civil cemetery from St Botolph’s churchyard.