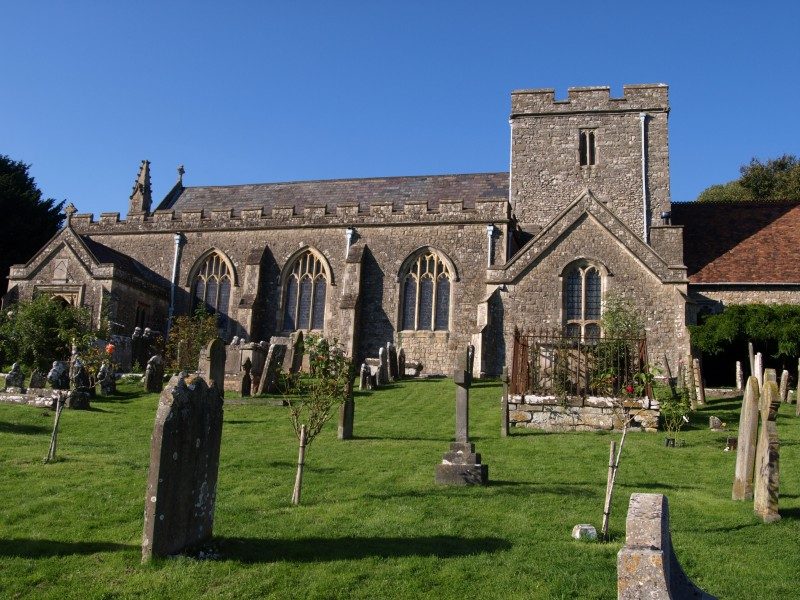 St Peter’s dates from early Norman times, possibly c1100, but little evidence of this remains. It was extended in the 13th, 14th and 15th centuries, and then repaired after a serious fire in 1832. Later in that century,  in 1874/5, extensive rebuilding works included the nave, aisles, south transept and porches. The result is a modern looking interior, emphasised by the totally incongruous re-pointing of the ragstone rubble stonework.

The church is in the most superb setting south of the North Downs, on the ragstone ridge, known as the Quarry Hills. The Greensand Way runs by the church. There is a stunning panoramic view from the churchyard, south across Boughton Monchelsea’s deer park and the Weald. Views extend as far as Port Lympne, over 25 miles away.
The second picture in the gallery shows the carved rood  screen  and rood. The posts of the screen have war memorial inscriptions. Facing the nave are the names of those lost in WW1, whilst the WW2 ones face each other across the central aisle.
The restored piscina and triple sedilia in the chancel are 13th century.
The first gallery photograph shows St Peter’s from the north-west, and at the far left the lychgate, which, dating from 1470, is thought to be one of the oldest in the world.
The stone reredos in the sanctuary has figures carved in alabaster, and is dedicated to the benefactor’s wife who died in 1882.
The unique Millenium window, with illuminated stained glass and accompanying music is a splendid highlight at St Peter’s. It tells the story of Christianity over the last 2000 years, but with much more, all of which is detailed in a leaflet at the church.
The large sculpture shown in the third gallery photograph is made of Parian marble (from the Greek island of Paros). The sculpture is set against the nave west wall.  It is by Belgian sculptor Scheemakers and is a memorial to Sir Christopher Powell (d 1742).
St Peter’s is open to visitors 2-4.30 on Wednesday, Saturday, Sunday and Bank Holidays from Easter to the 1st Sunday in October.