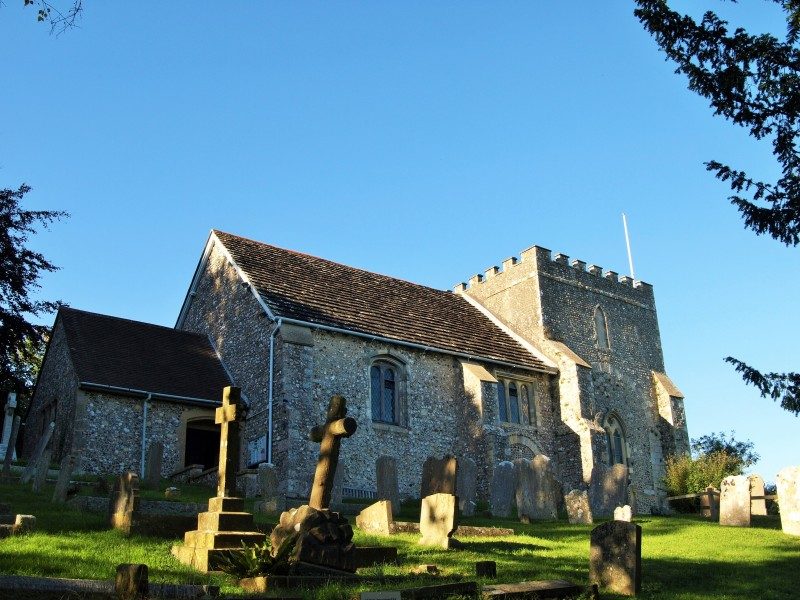 William de Braose, Lord of the Rape of Bramber, built Bramber Castle in 1073 on a hill overlooking the River Adur. Outside of the motte and bailey fortress, on the same chalk plateau, he also founded a church for a college of canons. This soon become the parish church of Bramber.

The church was originally built to a cruciform plan, but the small transepts no longer exist, and indeed were taken down before 1636, as evidenced by a drawing of that date. The 11th century crossing became the chancel, replacing the original one, which is believed to have been apsidal.

The fine 11th century chancel arch was originally the western arch of the crossing. The capitals which support the arch are decorated with early Norman carving, featuring heads and a fox, a traditional biblical symbol for the Devil.

The arch to the former north transept has two stepped orders and demi-shaft responds. Beyond this and to the left of the two light window is the oldest monument in the church. It is to the Rev Thomas Green (d1789) and consists of a circular plaque showing a seated woman, above a rectangular inscription.

The three light east window was renewed in Norman style in 1870 and has contemporaneous stained glass depicting, from left to right, St Peter, Salvator Mundi*, and St Nicholas.
A blocked arch in the north nave wall with cinquefoil headed lancet that was probably inserted in the 14th century, presumably when the entrance from the castle was no longer required. The entrance from the village was via an 11th century south doorway. The combined new west entrance and vestry was built in 1931.
The circular font has been retooled, but dates from the 13th century.

*Salvator Munti: Latin – Saviour of the world. Christ is shown with right hand raised in blessing, and left hand holding an orb surmounted by a cross to symbolize the Earth.