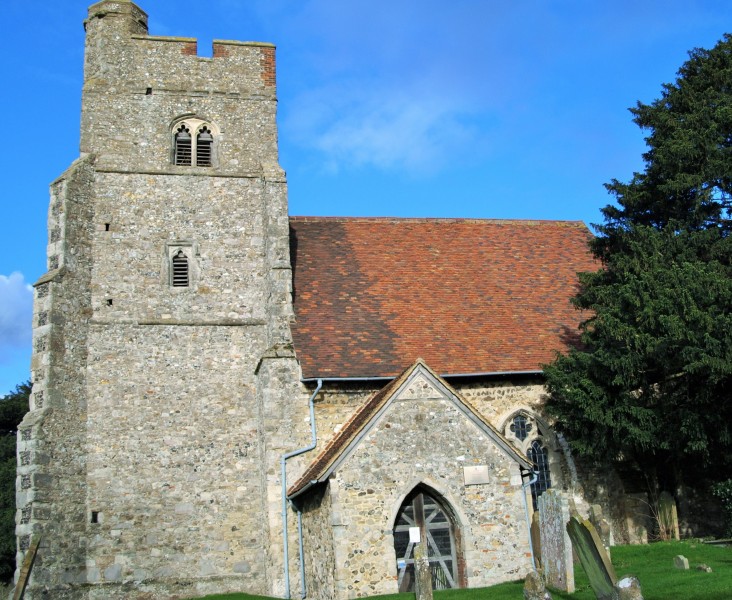 St Mary’s at Burham is a redundant church  that is vested in the care of the Churches Consevation Trust.
The random ragstone rubble and flint building sits beside the River Medway at an ancient crossing point used  by pilgrims on their way to and from Becket’s shrine at Canterbury cathedral.
Above, the main photograph shows St Mary’s Church from the south with the three/four stage tower with crenellated parapet, and the south porch.
The tower was a 15th century addition to the nave and chancel which were built by the Normans in the 12th century.
The first photograph in the gallery is a view in the main body of the church whichwas built as a single chamber, without a chancel arch or screen to divide nave and chancel. The east window was inserted in the 14th century. The church was enlarged in the 13th century, to serve increasing numbers of worshippers, by the addition of north and south aisles. Two centuries later the aisles were removed, probably because they had become structurally unsound and were not needed for a smaller congregation. The blocked arcade arches are still visible on both sides of the nave.
The second photograph shows the view looking in the opposite direction, towards the tower arch, and the third shows a section of the north wall with one blocked high level Norman window between two blocked arcade arches.

There are two Norman fonts at Burham church, one with a square bowl and the other with a round bowl. The latter was brought from the ‘new’ church up in the village when that building was demolished due to subsidence. Both fonts have arcade carving around the outside of the bowl.

The first picture in the gallery above is of the tower arch, west window, and, on the right hand (north) wall, an original bell wheel.
The medieval bell wheel is shown next in the gallery. The bell was attached to the centre of the wheel and a rope ran around the wheel, extending down into the ground floor ringing area. When the ringer pulled on the bottom coloured end of the rope (the ‘sally’), the wheel rotated through 360º, causing the bell clapper to hit the side of the bell. The next pull of the rope rotated the wheel in the opposite direction causing the clapper to hit the other side of the bell.
Finally in the gallery is a picture of a stone plaque in the nave floor, a memorial to Elizabeth Guy who died on June 27th 1792, sadly at the tender age of 5 years.