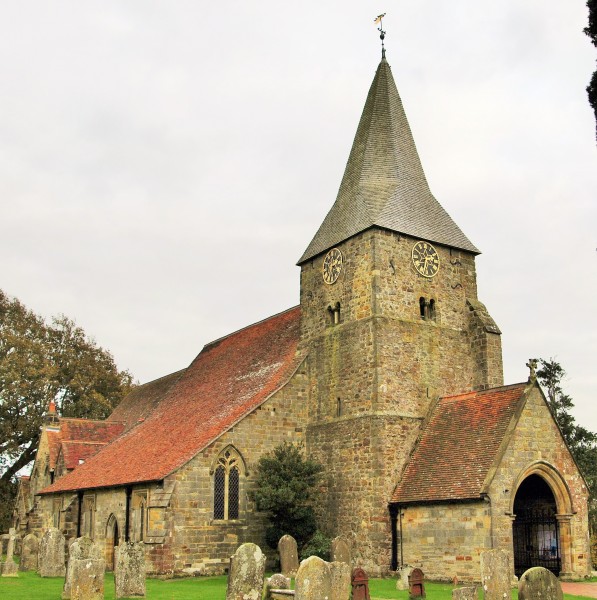 An early Norman church, of which only the tower survives, was built at Burwash c1090. The shingled broach spire was added in the 14th century, and an external stair turret replaced the internal stairs at the time of major restoration works in 1855. The stair turret was built very much in keeping with the original tower.
The original building, which consisted of nave, chancel and tower only, was enlarged by the addition of a south aisle c1190 and a north aisle c1250. The chancel was also extended at the latter date, and was rebuilt in 13th century style in the 19th century.

The chancel arch, which is very wide, is the original 13th century one. The widely spaced triple lancet east windows are accurate reproductions of the mid 13th century originals. The glass was installed in 1928 and depicts St Batholomew, to whom Burwash church is dedicated, the Madonna and Child, and St Richard.
The third photograph in the gallery is of a two light window in the south aisle, depicting the three Marys at the Sepulchre. It dates from c1869.

St Bartholomew’s houses several interesting monuments, of which the most  important is the earliest known example of a Sussex iron grave slab, dating from the 14th century. Formerly in the floor of the south aisle, the cast iron slab is now set on the wall of the Lady Chapel alongside a brass of a figure dating to c1440. The inscription on the cast iron slab is in Lombardic lettering and includes the words ‘orate p(ro) annema’ (pray for the soul). Misreading of the words led this area of the church to be called ‘Panama corner’. It was referred to as this in books by local celebrated author Rudyard Kipling.

The second picture in the gallery above is of an oval bronze memorial which is adjacent to the south door. It commemorates Lieutenant John Kipling, Rudyard’s only son, who was killed in action at the Battle of Loos in 1915, aged just 18.

The octagonal font dates from the 15th or 16th centuries. The bowl has the Pelham Buckle carved on two sides, signifying the connection of the Pelham family with Burwash, after the crest was bestowed on John de Pelham by Edward III following John’s capture of the French king, John.