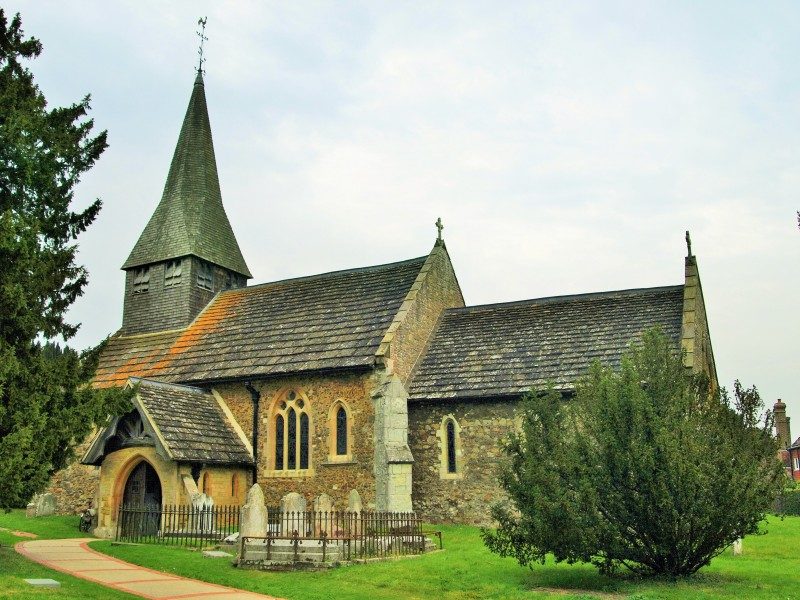 St John the Baptist, Capel is another church with an ancient Yew tree. This one, just inside the lychgate is thought to be some 1700 years old, and perhaps suggests that this could have been a religious site even before the advent of Christianity.
The present building, however, is largely 13th century, dating from c1240.
The main picture shows the church from the south. The roofs are of Horsham stone slates and the broach spire and bellcote are clad with oak shingles. The south porch was added in 1838, but apart from this, most of the south elevation is 13th century, including the nave and chancel south walls and roofs, the interesting chalk buttress to the south-east corner of the nave, and the lancet windows to the south wall of the chancel.

The first picture in the gallery shows the west doorway. The tall narrow doorway and dog-tooth moulding over the arch are typical features of Norman architecture, although the Norman period  had historically finished at the end of Stephen’s reign in 1154, almost a century before the church was built.

The second picture is of the chancel. The roof and east wall of the chancel are 13th century, as is the south wall including the piscina, (shown in the third photograph). The 3-light east window has glass dating from 1905, depicting The Virgin Mary, Jesus Christ, and St John.
In 1864 a major restoration was undertaken at St John the Baptist. This included removal of the old wooden pulpit, and replacing it with a fine stone one, (shown in the first photograph in the gallery above). The pulpit is circular, with arcades separated by coloured marble colonettes under foliate caps.
The second picture is of the equally impressive black marble font. It has an octagonal bowl on a broad circular stem, both with gilt carving, and a cover with crimped decoration.
Next shown is the 19th century spiral staircase for access to the bell tower, and then there are photographs of two wall monuments on the south wall of the chancel, set between the three 13th century lancet windows. Shown first is the monument to Sergeant-at-Law, John Cowper and his wife in a typical kneeling pose. John Cowper was a patron of the church. He died in 1599. The second monument is to his descendent Robert Cowper (d 1720).