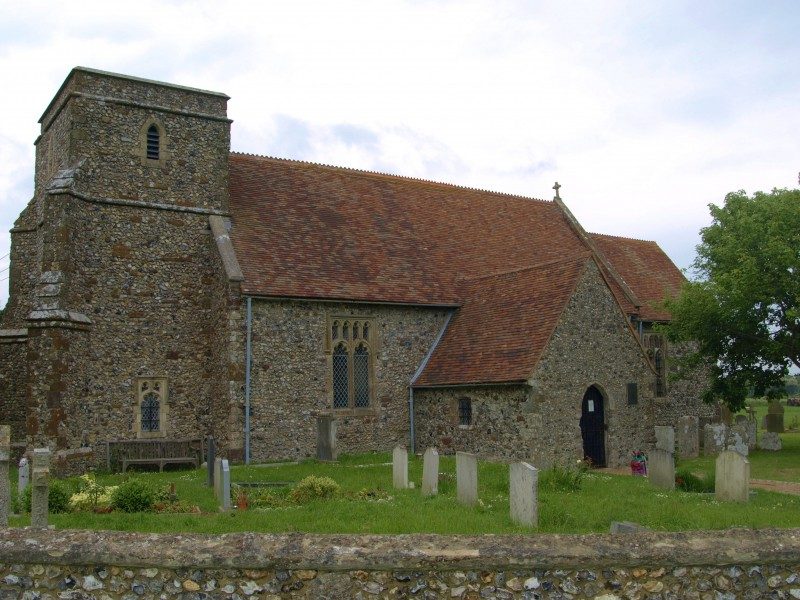 The parish church of St Mary, Caple-le-Ferne dates from the 12th century, but was made redundant in 1986 and vested in the Churches Consevation Trust.
The church sits high on the North Downs above Folkestone with views across the Channel to France. As with many North and South Downs churches, St Mary’s is built with walls of local flint and plain clay tiles to the roof. Witness to the early date of the church is a 12th century splayed window in the north wall of the nave. The round headed window arch has painted foliage decoration in the reveals, and the tiny lancet was later fitted with stained glass.
Shown above in the gallery, photograph 2, is the view looking east  from the nave towards the chancel. The stone dividing wall is 14th century, the lower part being a three bay arcade of roll moulded arches on octagonal piers. In a line above the arches are four moulded corbels which originally, pre-Reformation, supported the rood screen. On the far left, high up in the nave wall is the top section of a 14th century window inserted to give extra light to the rood.
The close up of the chancel screen shows the corbels, the window, and a large round headed arch opening for the rood itself. This is the most important feature at St Mary’s, being the only such opening surviving in the country.

There is a 13th century sediia with depressed arch head in the south wall of the chancel. Unusually, the sedila is joined to the trefoil headed piscina, with a small pillar of Bethersden marble forming the outside angle. There is a semi-circular aumbrey (a recess used as a cupboard) in the chancel north wall.

Apart from the aforementioned 12th and 14th century ones, the windows are all 15th century, with later glazing. There are fragments of medieval glass in the east window. The little 12th century lancet has stained glass of St George.
The final picture in the gallery is of a 19th century stained glass window, depicting knights, in the south wall of the nave.