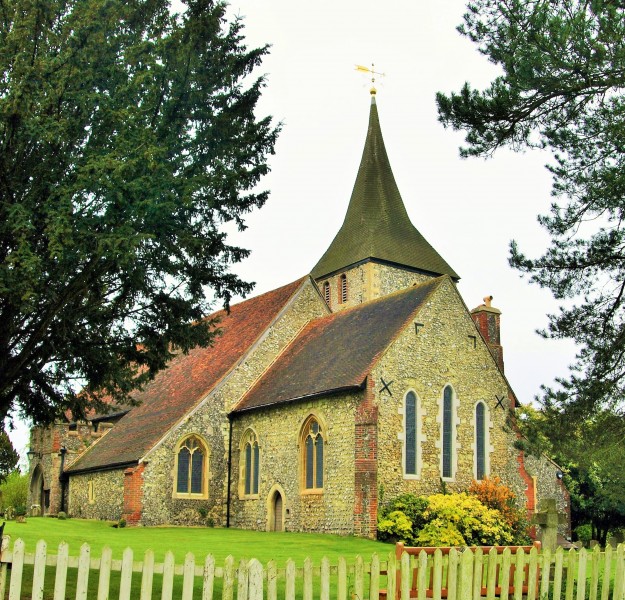 Church of St Martin of Tours

Standing along Church Lane, just off the busy A224 Orpington bypass, this pretty little church is of Norman origin, witnessed by its typically proportioned Norman nave with a round headed window and a circular window in the west wall, and a further blocked window in the south wall. Much of St Martin Of Tours church is, however, 13th century, when the chancel, south aisle and north tower were added. The south porch with embattled parapet is 15th century. The church was restored in 1857, and a north-west extension, known as the Brass Crosby Rooms was built in 2007.
The first picture in the gallery above is of the long narrow Norman nave looking towards the chancel. On the left, immediately before the chancel arch, is the early 13th century tower arch which has chamfered imposts (the slabs at the top of the capitals). On the right are the early 13th century arches of the two bay south arcade to the south aisle.
The second and third pictures are of the west end of St Martin’s. The Norman lancet window has stained glass installed in 1909, depicting St Faith.

The first photograph in the gallery above shows the three light east window. The stained glass was installed in 1951 and depicts The Resurrected Christ.

Second, is a photograph of a monument at St Martin’s  to one Peter Collett who died in 1607. It depicts Peter facing his wife and two daughters across a prie dieu (prayer desk). It has some unusual and interesting features, including reclining figures of two deceased children propped up on sculls, and paintings of gravediggers’ spades on the prie dieu. To the left of the Collett monument is another figure of a reclining child.

The octagonal font is probably 15th century and has a band of fleurons (floral motifs) above square panels.