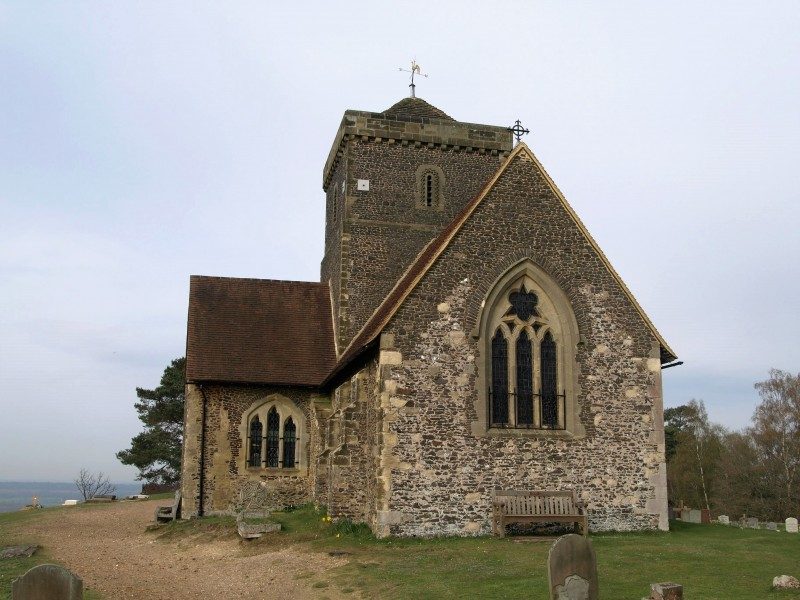 St Martha’s Church is set in a unique isolated position 573 feet above sea level on the top of the North Downs. Vehicular access, via a sandy track, is only allowed for weddings and funerals, but those managing the strenuous walk up the steep wooded hillside are rewarded with marvellous views from the top. The Pilgrims’ Way runs past the church.
It is said to be possible, on a clear day, to see eight counties from the church grounds, viz Surrey, Oxfordshire, Buckingham, Berkshire, Middlesex, Sussex, Wiltshire and Hampshire.
It is very likely that this hill-top was the location of an Iron Age settlement, and was certainly later the site of a wooden Saxon church which was recorded in the Doomsday book of 1086. Nothing remains of the Saxon building, which was in any case replaced by the Normans with a stone structure soon after Doomsday.
In 1745 the church was left in ruins when a huge explosion at the gunpowder mill, on the Tillingham river at the foot of the hill, brought the tall church tower crashing down through the building. The less damaged eastern end of the church was temporarily repaired, and then served for the next 100 odd years, until it was rebuilt, using some of the surviving walls, in Norman style.
St Martha-on-the-Hill was re-consecrated in May 1850.
St Martha’s was rebuilt in cruciform plan, with a central crossing tower.
The first photograph in the gallery above shows the view from the nave towards the crossing and chancel. In the nave roof, a huge tie-beam supports a crown post.
The chancel screen has foliage carving and a central Tudor arch. It dates from c1900.
The next photograph shows the three light east window with stained glass dating from 1953. The depictions are of St Martha, Christ, and a pilgrim.
The next picture is of the pulpit which was moulded from chalk for the new building in 1850.
The fourth photograph is of the font which dates from the 12th century, although the stone was re-dressed c1850. It was brought to the church from nearby Hambledon, south of Guildford.
Finally shown is a display case which houses some masonry salvaged from the Norman church after it was virtually destroyed by the gunpowder mill explosion in the 18th century.