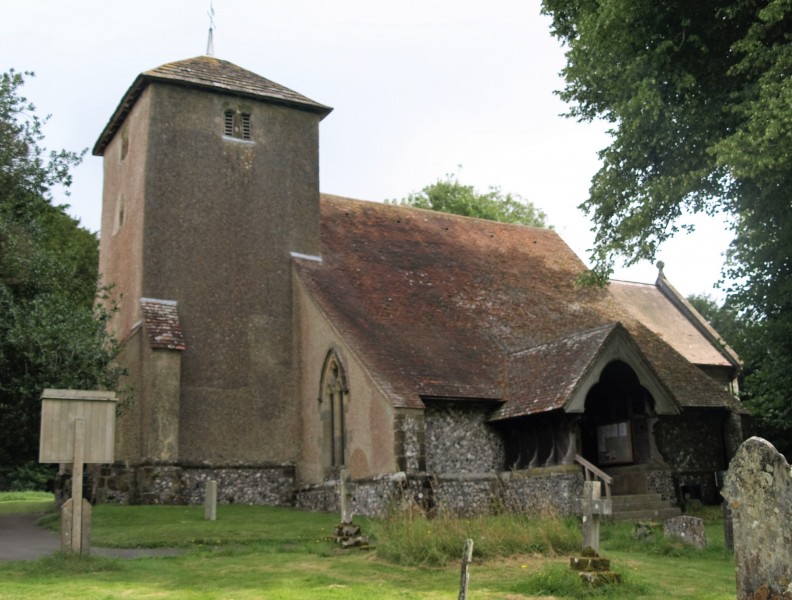 Church of St Catherine of Siena

The present church dates from the late 11th century when the Normans built it to replace an earlier Saxon building. Originally the church consisted of a nave and chancel only, parts of which still exist, notably the chancel arch which is a good example of early Norman architecture.
The tower and south aisle were added c1300. In the 17th century a minstrel’s gallery was built over the west end of the nave, but this was removed when the north aisle was added to the church in 1865. At the same time the porch was built onto the south aisle. Late in the 19th century the Victorians extended the north aisle eastwards to form a vestry, and carried out renovations to the chancel and windows.
The gallery below has photographs of the fine 11th century chancel arch, the north-east corner of the chancel, and the Lady Chapel with 2 light east window, altar table, and at the extreme right an aumbry  with wooden door. There is also a piscina to the right of the aumbry and out of shot.
The first photograph in the gallery below shows the Easter Sepulchre, which is thought to be contemporary with construction of the tower and south aisle, c1300, possibly making it the oldest in Sussex. This trefoil headed arch recess is in the north wall of the chancel. It was used to store the sacred elements from Good Friday to Easter Day. Easter Sepulchres are found only in England and Wales where the ‘Sarum Rite’ was followed.  They are quite rare having been destroyed along with rood lofts and screens at the Reformation.
The second picture is of a 13th century lancet window in the chancel south wall. Apart from a small detached panel at the easternmost window in the  south aisle depicting the Madonna and Child, this is the only stained glass in St Catherine’s. Rather strangely, three Richards are connected by this window. The dedication detailed in the inscription below the window is to the Rev Richard Ash rector at Cocking from 1860 to 1888 and who died in 1896. The stained glass is of St Richard de Wych, bishop of Chichester from 1244 to 1253, but the face is of the Rt Rev Richard Durnford, Bishop of Chichester from 1870 until his death in 1895.
The third photograph in the gallery is of a wall painting in the splay of an original 11th century window which was blocked when the south aisle was built c1300. The painting depicts shepherds with a dog, gazing up at the Star of Bethlehem. On the left of the shepherds, where the painting has been partly lost, are the arms of an angel holding a palm branch and pointing up to the Star.
The fourth picture is of the tub font which has been alternatively dated to the Norman or Saxon eras, and the final photograph is of the Lady Chapel window with the detached stained glass panel referred to above.