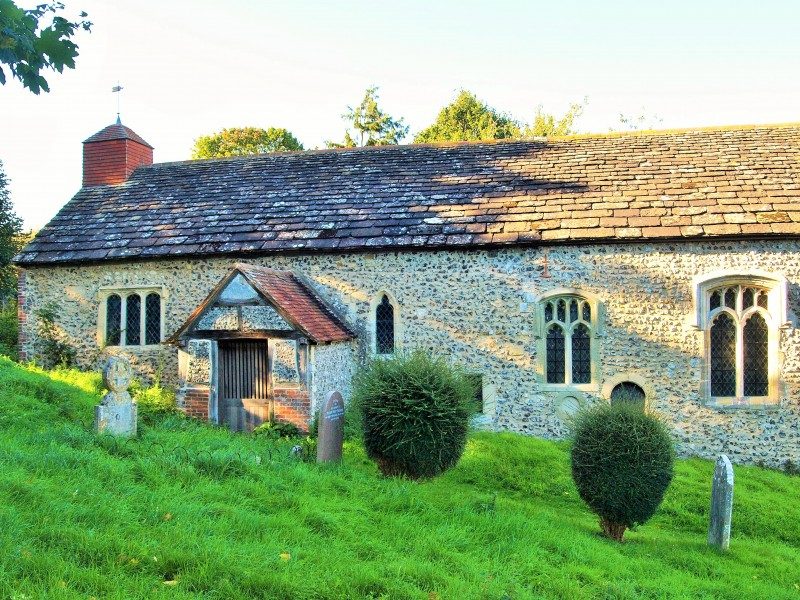 Coombes Church stands on a steep downland slope, indeed, from the 16th century porch, there are four steps down to the nave floor.
A church at ‘Cumbe’, probably Saxon, was recorded in the Domesday survey of 1086 and it was soon afterthis that it was rebuilt by the Normans, the chancel arch and a window jamb at the south-west corner of the nave, both being of late 11th century date.
There is a 12th century deeply splayed round headed window at the west end of the nave north wall north wall. In the south wall of the chancel
there is a 15th century window with 4 small trefoil headed lights above 2 cinquefoiled lights.It has elongated moulded labels rising from the level of the heads of the lower lights. Below this window there is a blocked round ‘low-side’ window. The purpose of these windows in medieval
churches is uncertain, one theory being to allow lepers to see the inside of the church, usually the chancel and altar, without entering the building. To the right of the low-side window is an 11th century priest’s doorway, rebuilt into the late 13th or early 14th century  wall.

The three light east window is 16th century, whilst the west wall has an unusual window which is probably 18th century. The medieval roof structure has 4 tie beams with posts that support a ridge purlin.

Coombes Church is most notable for its wall paintings, some of which are true frescos, having been painted on successive patches of wet plaster using red and yellow ochre pigments, white from lime and black from carbon. They are nationally important because of their very early date, having been painted by a group of artists, based at St Pancras Priory at Lewes, who worked from c1080 to c1120, at Clayton, Coombes, Hardham and Plumpton. Other paintings at Coombes date from the early 12th to the mid 18th century.

Above, from left to right: The east wall of the nave, with Christ shown in a mandorla above the chancel arch; to the left of the chancel arch, Christ giving the keys to St Peter and the book to St Mark. The lion of St Mark, in vivid ochre, is very clear at the top; the chancel arch on which a Hachette pattern extends up into the arch soffit, has a painting of a grimacing man, straining to support the arch above. Dating from c1120, it is most likely to be merely a humerous item.

A mural on the north wall of the nave, shows a man sitting in judgement on a throne with advisors in attendance. It could perhaps be Herod or Datian.  Also above is a carved face which is on the corner of the chancel arch impost below the painted figure.