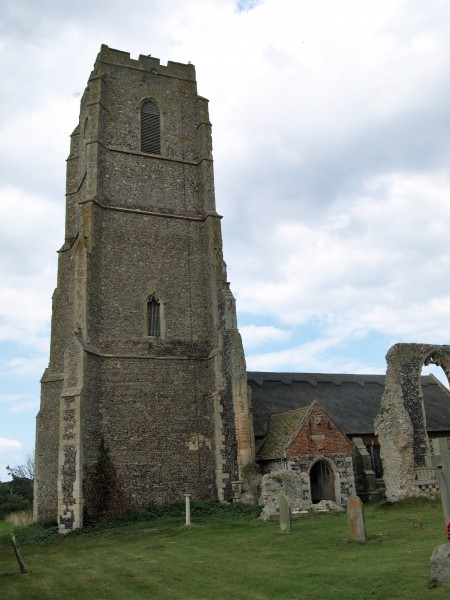 The Parish Church of St Andrews was built in 1672 within the ruins of a much earlier and larger church. The tower of the medieval church is the earliest extant part, dating back to the first half of the 14th century. The 17th century church was constructed abutting the tower and made use of much material from the medieval building.
The ruins consist of parts of a nave, chancel, north and south aisles, and sacristy,  dating largely from the 15th century, but with some remaining 14th century work to the aisle arcades. The south aisle and chancel walls are the most intact.
The main image above shows the 14th century tower, and the south porch of the ‘new’ church. The tower is in 4 stages, separated by string courses, and has a crenelated parapet. The roof of the 17th century church is thatched, as are many in East Anglia.
The first photograph in the gallery below is a view along the nave towards the altar and east window. The 2-light east window in gothic style is 19th century. The Ten Commandments are shown on plaques either side of the window. Next is a view in the opposite direction, towards the tower arch. Far left is the south doorway which was salvaged from the medieval church and re-used, as was the north doorway.
The third photograph is of the gable end of the 17th century porch. Set into the brickwork are 2 carved heads, probably salvaged from the medieval church. The upper one is wearing a crown and has a long parted beard, and the lower one, which has been severely defaced, appears to be a grotesque head.
The octagonal font is shown next. This is a fine 15th century font in typical Suffolk style, with lions alternating with woodwoses around the stem, and various designs around the bowl.
The fifth photograph is of the pulpit which was also salvaged from the medieval church, and then restored, probably in the 17th century.
Next shown is one of two inscriptions in the plaster on the internal north and south walls of the nave. They date the church accurately to 1672.
The last photograph shows the south elevation of the medieval ruins. The six windows of the south aisle remain, as do the tall south, east and north windows of the chancel, which extends beyond the aisles. The south aisle and chancel have a chequered stonework plinth, and there is also decorative work on the south-east buttress.