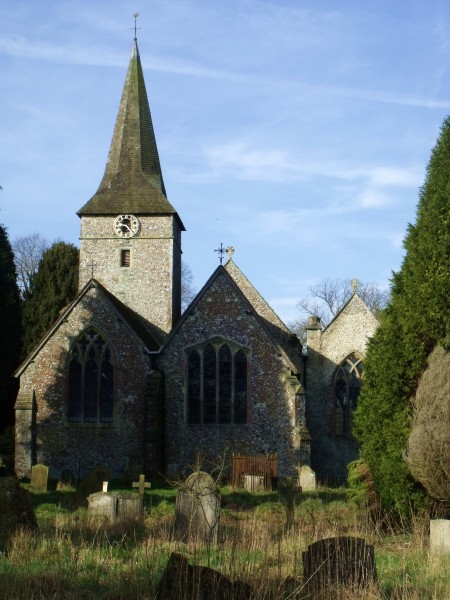 A church has existed on this site at Cudham since Saxon times, evidenced by records from AD 953 (when 7d was paid for holy oil), and AD 982.
The church is also recorded in the Domesday Book of 1086. The nave, which is long, narrow and tall, is typically Anglo-Saxon. There are two small deeply splayed windows in the nave with monolithic heads, one in the north wall and the other opposite in the south wall near to the porch. One is shown in the gallery below, first photograph.
The main photograph above shows St Peter and St Paul from the east. The tower adjoins the south side of the nave, and has a very tall lower stage with a small second stage, the two separated by a string course. The spire is shingled and is typical of the area.
The second picture in the gallery shows an English Decorated style window in the south wall of the nave. It depicts the Annunciation ( the announcement by the angel Gabriel to the Virgin Mary of her conception of Christ).
The next photograph is a view of the chancel. which dates from the early 13th century when it was rebuilt. The oak reredos behind the altar is thought to have been made with wood from the former rood screen taken down at the time of the reformation. The east window is perpendicular and was re-glazed when the original glass was blown out by a German bomb in 1944.
Above, in the gallery, an Easter tomb in the chancel. Unusually, this is on the south wall, to the right of the alter, whereas most Easter Sepulchres were on the north side. This tomb has elaborate carving in Decorated Gothic style, a common feature of Easter tombs.
Easter Sepulchres are only found in England and Wales, and take various forms. From a simple niche in the north chancel wall, to a large Decorated style arched recess, or as in this case, a tomb. Easter Sepulchres were used to deposit the crucifix and sacred elements on Good Friday before they were moved to the alter on Easter day. The symbolism is of Christ’s entombment and resurrection.
The second and third gallery pictures are of the two piscinae near the altars in the chancel and south chapel, where they were used for  washing communion vessels.
Shown last is the octagonal font which is probably 15th century.

One thought on “Cudham Church”