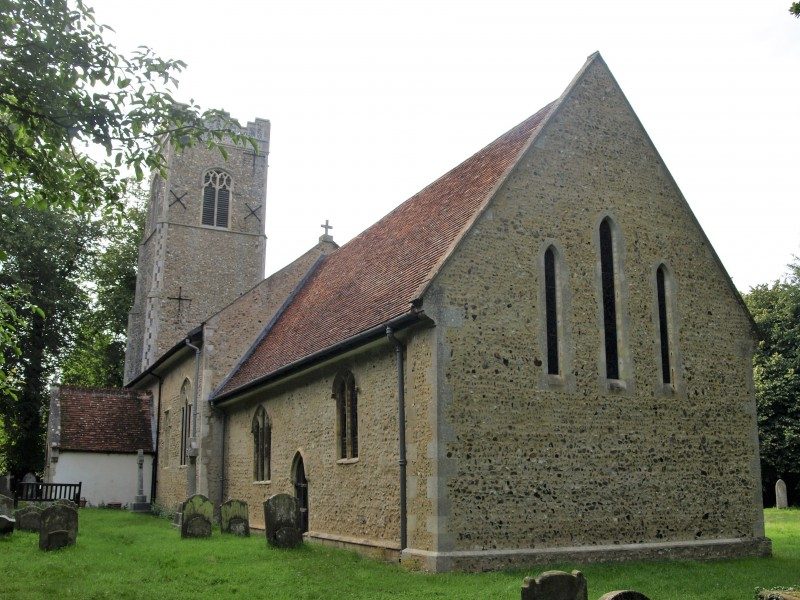 All Saints church at Darsham was built by the Normans early in the 12th century. Much of the original building has been lost in alterations and renovations, but the north and south doorways (the former having been blocked) retain early 12th century work, dating from perhaps c1120.
A priest’s doorway was cut through the south chancel wall in the 13th century.
The square tower with 4 stages and crenellated parapet was added in the 15th century. Fenestration changes were also made at that time, and the nave roof was raised. The south porch was rebuilt in 1887 at the time of the second Victorian restoration.
The first photograph in the gallery below is a view along the nave towards the altar and east window, which consists of three pointed lancets in Early English style but dating from the 19th century when the east wall was rebuilt. On the right (south) of the chancel arch, the opening for the pre-reformation rood stairs remains.
The second photograph is a view in the nave in the opposite direction, looking west. The current organ was installed in 1946. In front and to the right of it are part of a set of communion rails salvaged from St Stephen’s Church in central London, after it was destroyed by bombing in 1940.
Next shown is the early 15th century octagonal font. It is typical of Suffolk fonts with lions around the pedestal and fine carving around the bowl. The base is inscribed with a dedication to one Galfri Symond.
The fourth photograph is of a 2-light window in the chancel with early 20th century stained glass depicting Mary Magdalene and Martha. The latter was a New testament figure who was a friend of Jesus and witnessed the resurrection of her brother Lazarus by Jesus. The window is dedicated to local resident Mary Eleanor Kennedy-Purvis (d.1909). Next shown is a restored early 13th century lancet window in the north wall of the chancel.
Finally shown is one of the most important items in All Saints, a well preserved and finely detailed brass set in a ledger stone in the chancel floor. The inscription reads ‘Here lies ye body of Mrs Anne Bedingfield ……… ‘ (d. 1641).
Further reading:
The Guide to Suffolk Churches