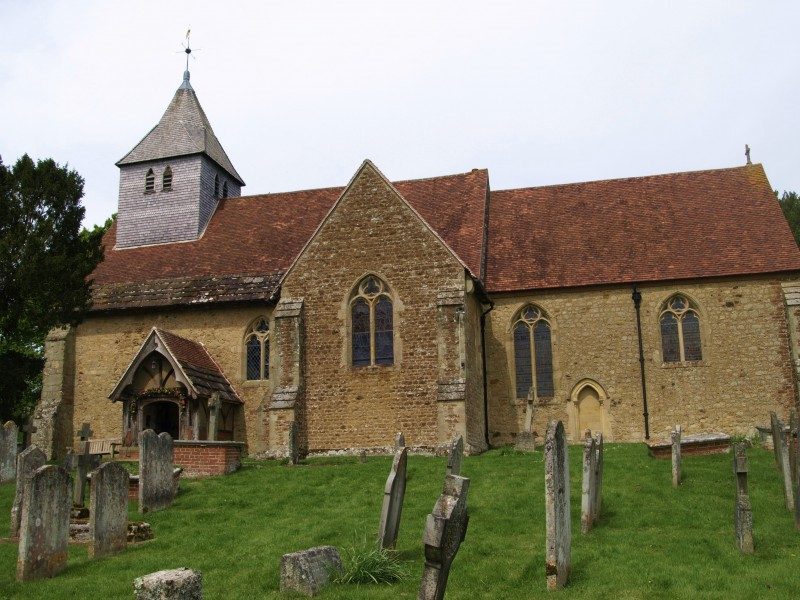 Dunsfold St Mary and All Saints

The Church of St Mary and All Saints

Unusually, the Church of St Mary and All Saints is almost entirely of one build. The tracery in the Decorated Gothic style windows is typical of a build date between 1270 and 1290.
The main photograph above shows the south elevation of the church with the original windows and the porch, which is also of the same date. The bell turret was added at the west end of the roof in the 15th century.
The main walls are built from Bargate stone rubble, a durable sandstone with a marked yellow tint caused by its iron oxide content. The nave stonework features galletting, a fairly common technique in the Weald area between the North and South Downs in which ironstone chips are inserted in the mortar joints between the sandstone. This fills uneven gaps in the sandstone rubble, reinforces the mortar joints, and gives a decorative effect.
The first photograph in the gallery below is of the north doorway which is original, late 13th century, but it is not known whether the galletting is also of this date, or, perhaps, inserted when repointing was carried out. The next picture is a close up of the galletting around the doorway.
The third photograph is of the Dunsfold Holy Well. Located approximately 100 metres down the hillside from the church lych-gate, the Holy Well is dedicated to the ‘Blessed Virgin Mary’. It is a ‘well spring’ which is fed from two streams that join just above the well. Well springs are an unusual geological feature in the Weald. The water is rich in chloride, giving the well a reputation for miraculous cures for eye diseases.
The first picture in the gallery above is of the triple sedilia and piscina in the chancel. The four arch combination is of particular note and beauty. The two centre shafts and their capitals and bases are of Sussex marble. All four arches have undercut hood mouldings, and delicately carved inners and outers. The seat levels step up, and there is a credence shelf to the piscina with bowl and two circular basins.
Next is a view looking east from the nave. The pews are very rare, being exceptionally well preserved for 13th century church seating. The bench ends (standards) are extended upwards in the shape of animal horns and finished with a sphere on each ‘horn’.
The last photograph is of the small round bowl font. It stands on a centre stem which is made of Sussex marble. The font is probably late 13th century, contemporary with the building of the church.
.