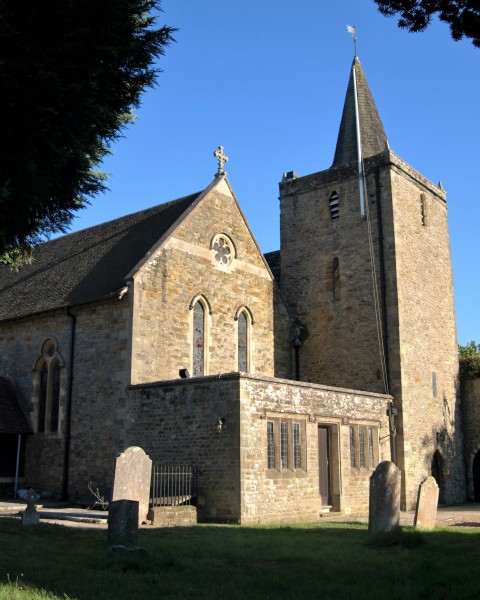 The Parish Church and adjoining Priory of St Mary, Easebourne have a complicated interconnected history. The earliest extant parts of the original church are sections of the south wall, where mid 11th century archstones indicate a former access to the priory cloisters. There are also remnants of Norman work, a narrow north aisle having been added in the 12th century with a three arch arcade of which one of the 12th century supporting columns survives unaltered.
Late in the 12th century the tower was built at the western end of the nave.
When the priory was founded c1248, parts of the original 11th century church passed to the nuns, the eastern end becoming their Presbytery and the centre section of the original nave becoming the nuns’ Quire. In compensation, the north aisle was widened to form a new nave for the parish church with a chancel area at its eastern end, thereby forming an ‘L’ shaped building.
Apart from fenestration changes, the next major works to St Mary’s were in 1876 when the modern chancel and organ chamber were added, and the south (Montague) chapel was built on the site of the former presbytery. In 1925 a choir vestry was built and the tower repaired.
The gallery above shows some of the fine stained glass at St Mary’s. The three light east window was glazed in 1877 when the new chancel was finished. It shows the Resurrection; Crucifixion; and Ascension. The two light west window and roundel above were also glazed in 1877. The two lancets depict the Nativity and ‘Suffer little children’, whilst the roundel is the Good Shepherd.
The third photograph is of the Millennium window installed in the nave south wall. It depicts the Madonna and Child over images relating to the priory, the church, and the village.

Shown in the gallery above is the modern, but nonetheless beautiful, chancel, and a closer view of the stone and marble reredos which depicts the Last Supper.
The third photograph is of the 13th century cusped arch recess in the north wall of the nave. The effigy is of Sir David Owen (died 1535). Sir David was a lifetime benefactor to the church and priory, and it was he who commenced the building of a huge mansion in Cowdray Park, now Cowdray Ruins after a devastating fire in 1793. Sir David was the illegitimate half-brother of Edmund Tudor, Henry VII’s father.
The last picture is of the 12th century square font of Purbeck marble. It has arcades on three sides, the fourth side being left blank on the assumption that the font would stand back against a wall. The small corner shafts have been renewed.

The south (Montague) chapel contains the fine gilded marble and alabaster Montague monument. Sir Anthony Browne, later made First Viscount Montague by Queen Elizabeth, is kneeling at a desk, behind his two wives, Jane Ratcliffe who died in childbirth, and Lady Magdalen Dacre.
Two other wall memorials are to William and his wife Elizabeth Poyntz. The Montague estate passed to the Poyntz family when the 8th Viscount’s sister, Elizabeth Browne, married William Poyntz,  Elizabeth having inherited when the Viscount died in a drowning accident on the Rhine.