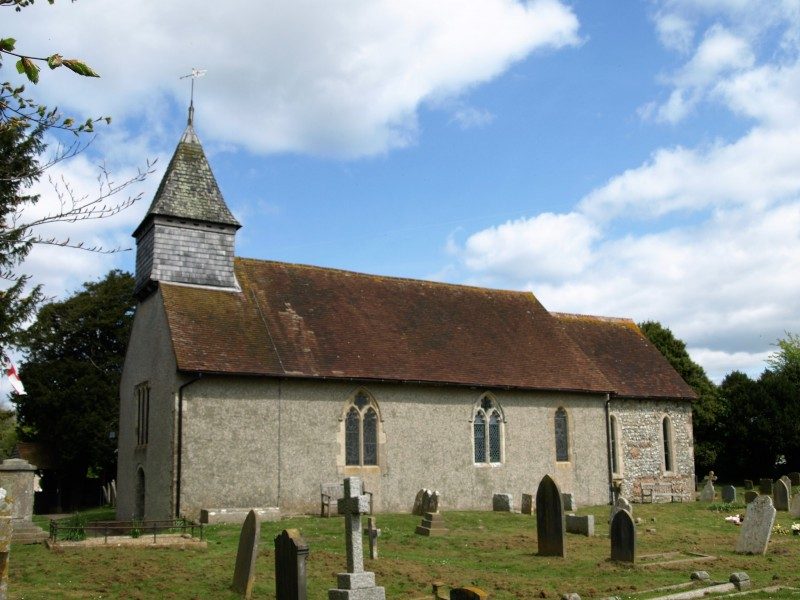 The church of St George at Eastergate dates from the 11th century. Parts of the chancel are from this time, although experts disagree as to whether this is Saxon or very early Norman. The earliest extant part of the nave is the north doorway which dates from the 14th century and was later blocked. There is a shingled bell turret which overhangs the west gable of the church, and a north vestry which was built c1925 to replace an earlier Victorian structure.
There is a tiny round headed window high in the north wall of the chancel which is contemporary with the Saxon/Norman build. Other windows in the church are of various date. The chancel south wall has two 13th century lancets, and a 14th century 3-light east window. The nave has 15th century south windows, and a 3-light west window, installed when the west end of the nave was lengthened by 12 feet following a bequest in 1534.
The first picture in the gallery above shows the south wall of the chancel with herringbone masonry including re-used Roman bricks, presumably salvaged from the ruins of a nearby Roman villa.
The second photograph is of one of the two tall lancet windows inserted into the south chancel wall in the 13th century. The next view is of the east end of the chancel, showing the 3-light 14th century east window. The stained glass was installed to commemorate Earl Kitchener who died in 1916. The glass depicts: St George; Christ holding crown; St Michael.
The fourth and fifth photographs are of the ancient chancel window from outside and inside. Originally unglazed, it was small and was placed high up in the wall to limit cold and draughts. The single arched stone which forms the head of the opening outside is worthy of note.
The first picture in the second gallery is of the nave looking east towards the chancel. The crown post roof in the nave was fitted in the 16th century. In the background, just inside the chancel arch and facing each other across the chancel, are two very unusual early 19th century priest’s stalls with Classical style testers. The altar rails are a little earlier, dating from the 18th century.
The next photograph shows the wall mounted organ, dating from 1948, and another view of the chancel, including one of the priest’s stalls, the east window, and the Saxon/Norman opening.
The third picture in this gallery is of a 2-light window with cinquefoil heads in the north wall of the nave. The stained glass depicts Faith and St George with Christ holding a crown in the top light. The commemoration is to one William Warne who died in the first World War.
Next shown is another 2-light window, this one in the south wall of the nave. The stained glass is ancient, dating from c1360. The top light depicts the arms of the FitzAlan family (the Earls of Arundel).
The fifth photograph is of the plain octagonal font, which is probably late 12th century, although the condition indicates that it has been reworked at some time.
Finally, is a photograph of a fine, late Elizabethan granary, perhaps dating from c1600, which stands next to, and is now used by, the church. The building has a barn-end tiled roof over red brick walls with timber framing. It stands on mushroom like supports called staddle stones which lift the barn off of damp ground and deter vermin.