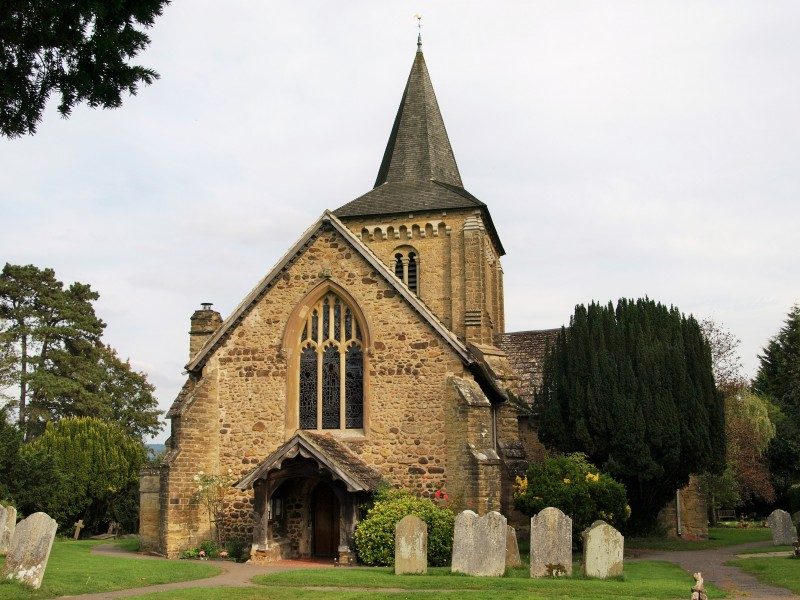 The church of St Peter and St Paul, Ewhurst dates from c1140 when it was founded by monks from the Priory of Merton.
The oldest extant parts of the original building are found in the nave. The south doorway dates from this time and the surrounding moulding has been described as the best example of Norman architecture in Surrey.
The main picture above shows St Peter and St Paul from the west. The porch is 15th century with scalloped bargeboards finishing in ogee pattern at the gable apex. Above the porch, the perpendicular style window has a surround incorporating three 15th century stone carvings of heads.
The church was enlarged in the 13th century when it was given its cruciform shape with a central crossing and tower. In 1838, disaster struck during repairs when the tower collapsed bringing down much of the north transept and the chancel.

The first picture in the gallery above shows the south doorway, with large jamb columns, scalloped capitals, and double roll moulding under the hood.
Next shown is a view towards the crossing showing two of the four rebuilt arches which support the tower. The 3-light east window in the background has stained glass installed in 1927, depicting Jesus Christ flanked by St Michael and St Gabriel.
The third photograph shows the early  17th century Jacobean oak pulpit, on an octagonal stem. It has arcaded panels separated by carved borders.
The south transept at St Peter and St Paul suffered damage in 1838 when the tower collapsed, but to a lesser extent than other parts of the church, thus leaving more of the 13th century work intact. The first photograph in the gallery above shows the south elevation of the south transept with three 13th century lancet windows and a trefoil window above set in rough dressed galleted sandstone blocks.
The next picture is of the same transept windows from the inside, showing the deep reveals.
The third picture shows the south transept doorway which was exposed in 1931 during repair works. The tall rere-arch is typical of Early English gothic architecture.
The last photograph is of the 13th/14th century font which has an unusual tapering square bowl with St Andrews crosses and chevron carvings.