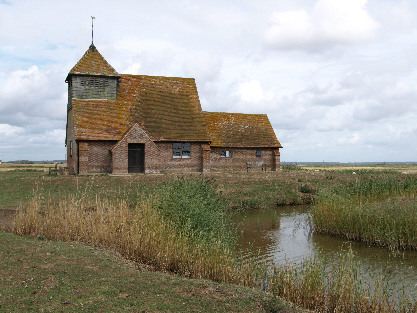 The main photograph shows the tiny church of St Thomas à Beckett standing in splendid isolation atop a small mound on Walland Marsh.
The year 1252 saw the start of a series of violent storms which radically changed the English Channel coastline to the east of Hastings, and culminated in the Great Storm of 1287 which destroyed Old Winchelsea, which was, at the time, the third largest port in England. Raging seas broke through the coastal shingle banks, flooding much of the low-lying marsh inland. After the storms subsided, the local population began reclamation of the land from the sea by a process known as inning. This involved raising earth embankments with one-way drains to allow water out through the sea wall at low tide.
By the end of the 13th century Walland Marsh had been ‘inned’, and the small farming community at Fairfield needed a place of worship. The outcome was a church building large enough only for the needs of the farming families in the immediate locality, a building which has been maintained and survives today as a testimony to the dedication of the local community.
Photographs in the gallery below show the church interior with striking white painted box pews, presumably one ‘box’ designated for each family, and the three tier pulpit.
The building itself was originally constructed of a timber framework with infills of lath and plaster. The timber frame was renewed in the 15th century, and the lath and plaster was replaced by brickwork in the 18th century. However, less than 200 years later, the church was found to be in danger of collapse, necessitating major rebuilding work. In 1913, the complete roof, turret, chancel, porch and north wall of the nave were taken down and rebuilt, using, as far as possible, the original materials.
The first picture in the gallery below shows the old, oak, roof timbers with a large tie-beam supporting a crown post which in turn supports a crown plate and collar rafters.
The second picture is of the plain font, which has a rare septagonal lead-lined bowl, supported on a circular column.
The last photograph shows how isolated this little church is.
St Thomas à Beckett Church remains in use today, there being a service there on the first Sunday of each month. For access at other times, a key to the church hangs on the house wall of Beckets Barn Farm, on the opposite side of the lane, approximately 100 metres towards Appledore.