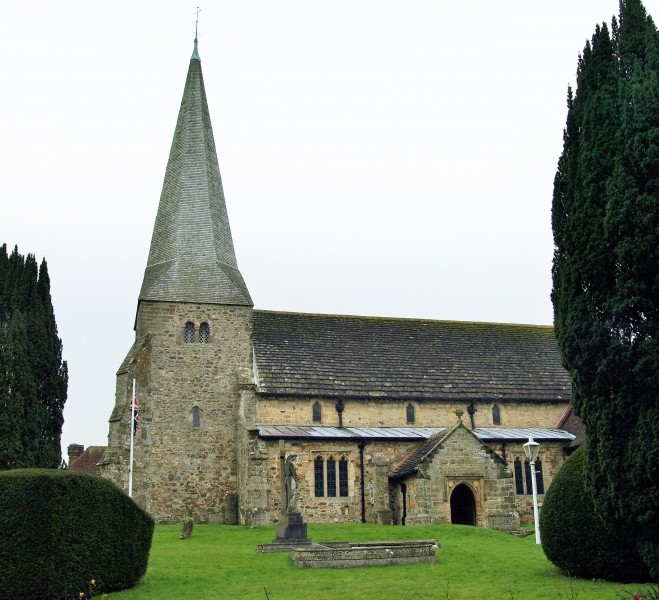 Church of St Andrew and St Mary the Virgin

The parish church of St Andrew and St Mary the Virgin dates from the early Norman period at latest, although there is thought to be some indication of late Saxon or Saxon/Norman transitional work. The main picture above shows St Andrew and St Mary from the south.
The complete tower, excluding the spire, and the nave to the width of the arcades, are Norman, this being the extent of the original stone building. In the 13th century, major building work transformed the church into cruciform plan, with chancel, aisles, and north and south transepts, in Early English style, being completed by c1230.
The first photograph in the gallery below is of a double wide-headed opening of Norman overlap architecture in the tower belfry stage.
The next photograph is of the tall narrow doorway from nave to tower which is typically Saxon/ early Norman. The chevron carving to the semi-circular arch has been restored. Some of the original chevrons remain on the tower side.
The Victorian font has a circular bowl with foliage decoration, on triple shaft supporting columns.
The third picture is a view looking west from the chancel, back through the rood screen, which although restored, retains some original 15th century woodwork.
The fourth photograph in the gallery above shows part of a Norman window in the south wall of the nave, blocked when the arch for the south aisle was inserted in the 13th century. Above the point of the arch is one of the six c1340 clerestory windows. Next is a closer view of another of the clerestory windows. The stained glass in the windows depicts angels holding banners.
The last photograph is of a blocked arch between two of the south arcade arches which is perhaps a tall rere-arch to an original Norman doorway in the nave south wall.

The chancel is shown above in the first photograph. Unusually, the chancel is four feet wider than the nave. Another unusual feature is the east window. Dating from the late 13th century, the three lights have sharply pointed arches which rise from low down on the centre mullions. The head comprises three cusped circles, and the stained glass, depicting scenes of the Nativity  is by Kempe and dates to 1898.
The second picture in the gallery shows the east wall of the north transept with two Early English lancets. There is a Decorated style piscina between. The right (south) of the two windows is glazed with ancient 14th century glass.
The piscina, shown in close up in the third picture, dates from c1340, and has an unusually positioned effigy bracket at the top of the hood mould.
The fourth photograph shows the piscina and sedilia to the south side of the chancel. They are modern renewals, but are nonetheless beautiful.
Next is a fine alabaster tomb monument in the south transept dating from 1596. It holds the recumbent figures of Richard Leche, High Sheriff of Sussex and Surrey, and his wife Charitye. There is also a small skull symbolising the death of one of their children.
Last in the gallery is a picture of a stone slab in the south transept with brass inscription and pair of gauntlets. Dating to c1450 and in memory of Peter Denot, it shows that his occupation was a glover.