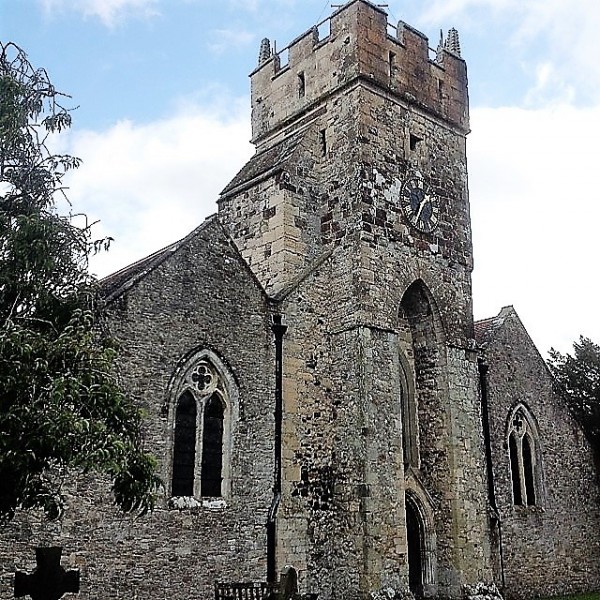 A church at Freshwater was established by the Saxons in the 8th or 9th century when it was probably a timber building. This was replaced by a stone building before the Norman Conquest, as evidenced by typical Saxon ‘long and short’ masonry high up on the westernmost nave piers. These would have been the quoins of the nave outside wall before the building was extended westwards during the 13th/14th century.
Much of the extant building structure is however 12th century Norman, when the church had a cruciform plan with nave, chancel and north and south transepts, now being the Compton and Afton Chapels. The north porch has an early Norman archway with chevron decorative carving, thought to have been moved there from the Afton Chapel when the porch was built.
The configuration of the west end of the church is most unusual, the 15th century crenelated tower being built on part of the 13th century projecting west wall, which itself features a very tall pointed arch with recessed window.

The first photograph in the gallery below shows the lovely chancel, originally Norman, but which was extended eastwards and restored in the 19th century. The second photograph shows a section of the rood stairs, and beyond, part of the former east wall which was the far end of the chancel before it was extended. Next shown is the font with reworked bowl on 12th century columns.
The fourth photograph is of the Afton (south) Chapel. Both the Afton Chapel and the Compton (north) Chapel are named from ancient Norman families that held land around Freshwater, hence also the place names Afton Down and Compton Down. The Afton chapel features historical wall brasses and a memorial to the poet Alfred, Lord Tennyson, who moved to nearby Farringford House in 1853, and then worshipped at All Saints.
The medieval wall brasses are shown in the fifth gallery photograph, and the Tennyson bust is shown in the next photograph. The 1992 bust is set in a late 13th century tomb recess which is cusped with pierced quatrefoils.
Next shown is St Agnes Church, Freshwater. Built in 1908 on land given from the Farringford estate by the Tennyson family, it is the only thatched church on the Isle of Wight.
The penultimate photograph is of a two lancet window, with quatrefoil over, in the south aisle. The stained glass depicts Sir Galahad, the subject of a Tennyson poem.
Last shown is the stone pulpit with its black marble columns, believed to date from the time of the Victorian restoration in 1875/6.