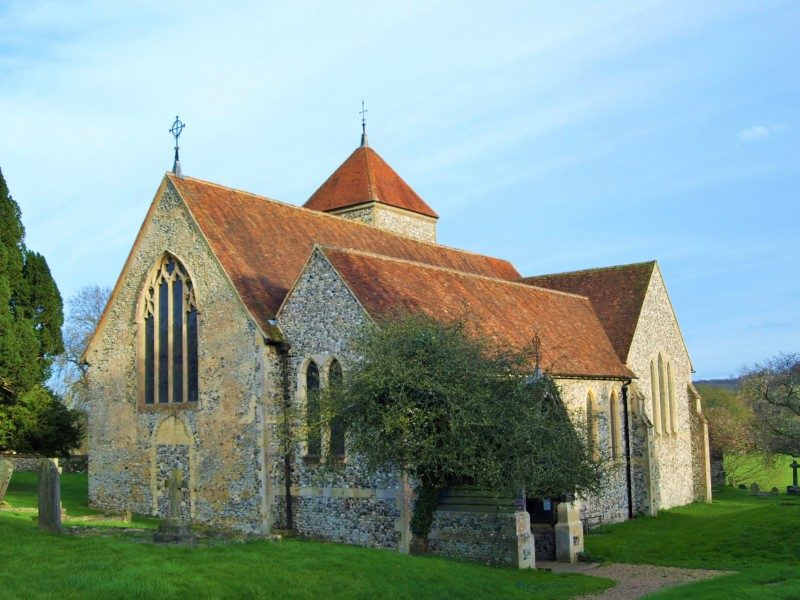 The Parish Church of St Laurence the Martyr at Godmersham is of Saxon origin, but is variously dated to the 10th or early to mid 11th century.

The north wall of the nave, the northern section of the west wall, and the western end of the chancel, are all surviving parts of that early building.

The blocked west doorway has a round arch of Norman dog-tooth blocks, around a tympanum which has a cross worked into the masonry. The restored apse has two round headed Norman windows in the east wall, and a fine ceiling.

Five of the six bells at St Lawrence’s were cast  in the churchyard in 1687, the sixth having been added in 1999.

There is a fine bas-relief  hung on the south wall of the chancel. It is thought to be a depiction of Thomas à Becket that was carved at the end of the 12th century soon after his murder in Canterbury  Cathedral in 1170.

All of the English Gothic architectural styles can be seen at Godmersham church. The three lancet windows to the east are Early English gothic, contemporary with the chancel extension which was built c1250 forming a new sanctuary. The nave west window (seen above the blocked doorway) is Decorated Gothic, having been built into the existing 11th century wall in the early 14th century. There are two Norman windows in the north wall of the nave, and to the right (east) of these is a larger window in Perpendicular Gothic style, inserted c1500.

The font, made of Devonshire marble, is Victorian, installed at the time of a general restoration in 1865-6. The extensive works at this time included the addition of the south aisle, south transept and vestry, blocking of the north chancel door and west door, rebuilding the top section of the tower and adding a pyramid roof, a new roof to the chancel, a chancel screen, and new pulpit and pews.