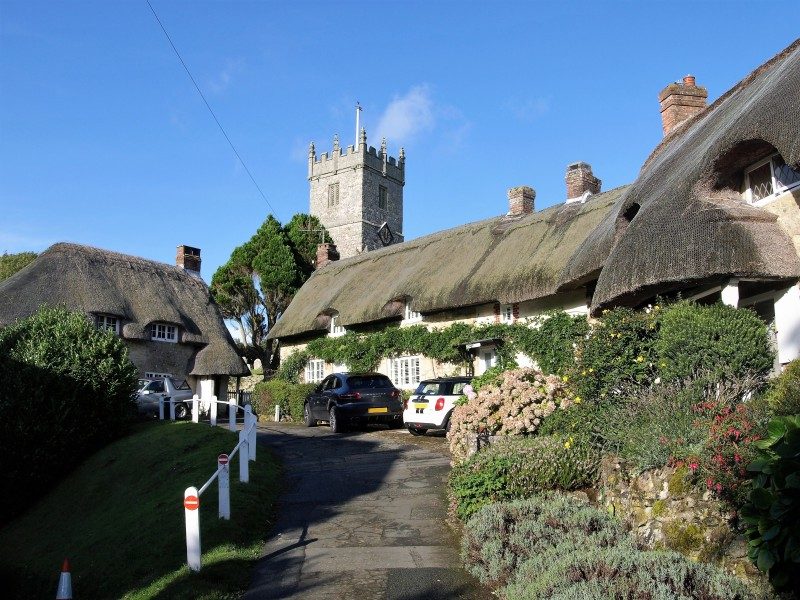 The main featured image above shows All Saints church standing high on ‘the Hill of the Gods’, which had been a place of pagan worship since before Christianity was brought to the Isle of Wight in the late 7th century. It is thought that the first Christian church on the site was built in the mid 11th century during Edward the Confessor’s reign. This church was given to the Abbey of Lyra in Normandy soon after the Conquest.
Nothing of that church, or the Norman one which would have replaced it, remains, the current building dating from the early 14th century. The lower part of the tower, the transepts, and the south chapel and chancel east windows all date from this time.
The church has an unusual plan, there being a double nave and chancel with narrow north and south transepts, a west tower, and a mid 18th century south porch.

The first photograph in the gallery below is of the church from the south-west showing the three stage tower with crenellated parapet, and the west end of the south nave. The second photograph is a view of the south nave looking east towards the chancel, and next, is a closer view showing the modern (1948) rood beam and rood. This is set at the entrance to the south chancel where, pre-reformation, there would have been a rood loft above a chancel screen. The figures represent The Virgin Mary and St John in attendance to Jesus on the Cross.
The fourth photograph shows an extant section of the rood stairs which led to the original rood loft where candles were kept burning.
The fifth photograph is of the most celebrated item at All Saints, the Lily Cross wall painting. This medieval (late 15th or early 16th century) painting is on the east wall of the south transept. It is the only such painting in the country, although there are others in Europe. Christ is depicted crucified on a three branched foliate cross rather than a wooden cross. There are angels with scrolls painted on the wall above the Lily Cross, and there are carved corbel heads and grotesque springers in the transept roof.
Finally in the first gallery is a photograph of a consecration cross on the south wall below the rood beam. The medieval lettering next to the consecration cross is unclear but perhaps contains the date of consecration of the church.

The first and second photographs in the gallery below are of two of the fine selection of monuments at All Saints. Shown first is the monument to Sir John Leigh and his wife (d.1529). This monument is set between the chancel and north chapel, and consists of the two effigies in alabaster on a tomb chest. As is common, a dog lies under their feet with its gaze focussed above their heads, indicating fidelity and faith. Above the tomb there are intricately carved 4 centred cusped arches with tracery panels and spandrels.
The second photograph is of the Worsley monument to James Worsley (d.1536) and his wife (d.1557). They are depicted in traditional pose, kneeling in prayer at lecterns, and are set in a decorative pediment with putti (cherubs) bearing shields at the top.
Next is the piscina in the south chancel. It is lopsided, appearing to have been ‘squashed’ on its right-hand side by a dogtooth moulding which may have survived from Saxon or early Norman times.
The fourth photograph is of the 17th century parish chest with its traditional three locks. Next is a painting, mounted on the wall opposite the south porch, by the school of Rubens. The subject is ‘Daniel in the Lions’ Den’, a story from the Old Testament used to teach faith. The biblical text says that Daniel used his faith in God to shut the lions’ mouths, and thus survived.
The final photograph in this gallery shows one of the fine stained glass windows at All Saints. This 2-light decorated style window depicts the Annunciation.