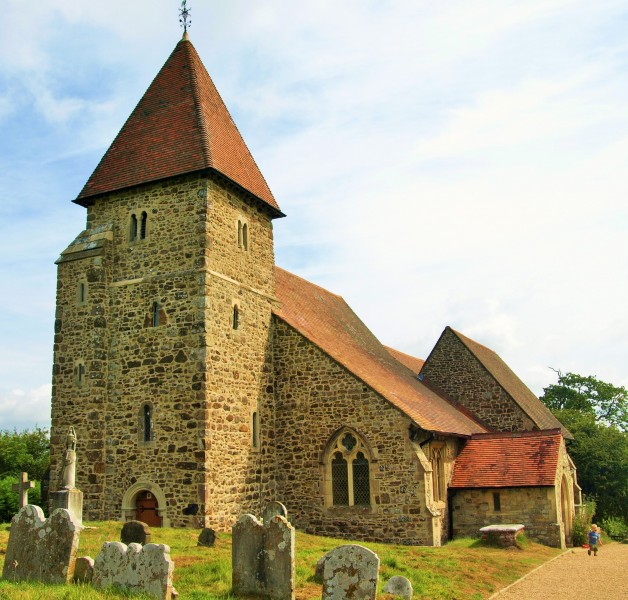 This lovely little church, part of which dates from the 11th century, is in a beautiful peaceful setting, just back from the High Weald coast, east of Hastings.

The parish church of St Laurence is Grade 1 listed for its tower which was added to an existing nave c1100. The original west wall of the nave remains, but is of uncertain date, possibly Saxon or very early Norman.

The tower has two unequal stages with round headed windows in the lower stage, and double bell openings with a central baluster in the upper stage.

There is a steep stair turret to the north-west corner of the tower, and a pyramidal spire with plain tiles and bonnet hips. Unfortunately no access to the tower is currently permitted.

The north aisle was built at the same time as the tower, c1100, and retains a 12th century deeply splayed round headed window in its west wall, and at the opposite end, a good example of a transitional (Norman to Early English) archway into the (north) Chapel of St John the Evangelist, now used as a vestry.

The chancel dates from the 13th century, whilst the Chapel of St Mary or Ashburnham Chapel, and the south aisle were both added in the 14th century.

Guestling church was restored by the Victorians in 1886, but four years later was almost destroyed by a serious fire, caused by an overheating iron flue. The stonework survived and the church was then sympathetically restored in medieval style.

The chancel has an oak boarded semicircular roof and a three lancet east window which is a 19th century replacement for a 16th century mullioned window. The oldest extant details in the chancel are the piscina and the two sedilia. There is a fine monument to John Cheyney (d1603) and his wife Elizabeth set into the north wall of the chancel. The figures are in traditional pose, kneeling facing each other.

The round headed arch from the north aisle to the north chapel is finely carved with chevrons. It is supported on semi-circular responds (half piers) with foliage decorated capitals. It is a good example of the architecture of the transitional period from Norman to Early English Gothic, in the late 12th century. The octagonal font dates from 1914 and has a marble shafted base. Near to the font, in a small alcove, there is a French statuette of St Laurence, to whom Guestling parish church is dedicated.