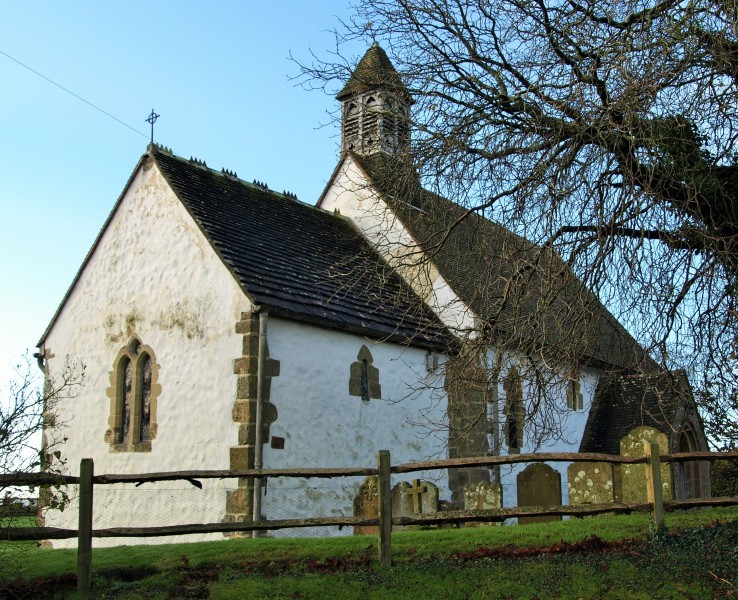 St Botolph’s at Hardham is a simple ‘two cell’ building consisting of nave and chancel only. The architecture suggests either a Saxon or early Norman build date, but there are two indications that the former is much more likely:- St Botolph was a Saxon saint, and the square east end was typical of pre-Conquest buildings.
Sandstone from the Weald and flint from the South Downs are combined with re-used Roman stonework and tiles to build the church walls which are 2’ 9” thick.
The main photograph above shows St Botolph’s from the north-east. The bell turret and porch are 19th century additions

The first photograph in the gallery above shows the south east quoin. The white plaster frames large ‘long and short’ blockwork, characteristic of Saxon building. The third  course up is a block of Roman tiles still set in original roman mortar.

Next is a photograph of a section of the south wall of the chancel showing a squint which indicates the former position of an anchorite’s cell which was attached to the church c1250. The squint allowed the cell’s occupant to see the altar and to receive communion. The first anchorite, a woman named Myliana, was followed in the cell by one Prior Robert, who died there in 1285.
The third picture is of the plain octagonal font which is 15th century.
St Botolph’s has two bells, one of which is the oldest in Sussex, dating, possibly, from the early 12th century.
The church is even more famous, however, for its wall paintings, which also date from shortly after 1100, and are thus the earliest almost complete series of wall paintings in the country. The murals are true frescos, having been painted on plaster while it was still wet.
There are forty individual paintings, relating to four main themes, arranged in two tiers, of which the upper tier scenes are better preserved and easier to decipher.
The first picture in the gallery above is a general view of the wall paintings in the nave and chancel. Next shown is the earliest known painting, in a British church, of St George lancing the dragon. This is thought to have been painted on the north wall of the nave soon after the end of the First Crusade in 1099, when the legend was brought back from the Middle East.
There are then two photographs of scenes from the story of Adam and Eve, on the chancel west wall above the arch. To the left is ‘The Temptation’ with Eve receiving the forbidden fruit, and to the right is a depiction of Eve milking a cow, one of ‘The Labours of Adam and Eve’.
The final photograph is of the mural depicting ‘The Annunciation  (to the Blessed Virgin Mary)’, which shows the announcement by the Angel Gabriel to the Virgin Mary that she would conceive and become the mother of Jesus.
.