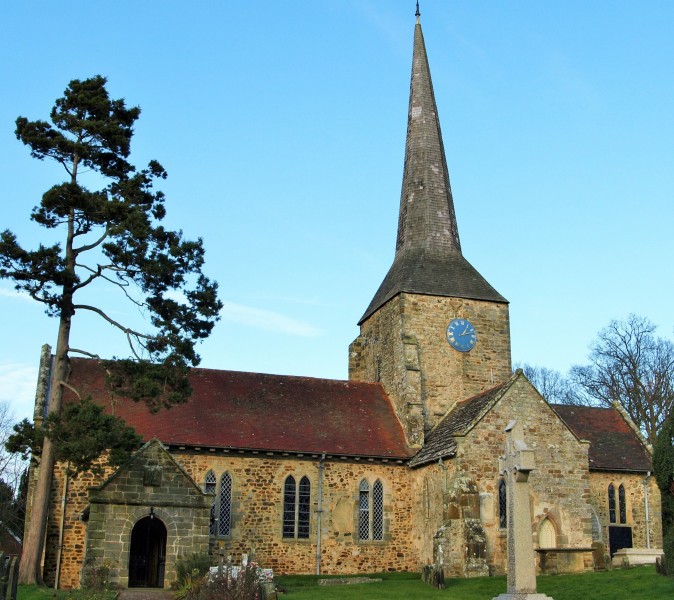 Earthworks in the churchyard, and around the nearby school playground, suggest that this was once the site of a prehistoric dolmen circle. This is given further credence by the orientation of the present building which is, very unusually, not east > west, but north-east > south-west, (as is Stonehenge). A pagan temple on the site would therefore have been aligned to receive the rays of the rising sun at the summer solstice.
Newly converted Saxon communities were often encouraged, by Christian missionaries, to build churches on the sites of pagan buildings. This was probably the case at Horsted Keynes, with a wooden church later improved to a stone building. Some of the stonework at the base of the tower appears to be Saxon, as does the repositioned doorway in the north aisle behind the font.
After the Conquest, the Normans rebuilt the church in cruciform style, although, of this, the north transept was later demolished. At the crossing there is excellent evidence of Norman building work in the semi-circular arches and 4 feet thick masonry under the tower. Remains of Norman windows are visible in the south wall of the nave.
The first photograph in the gallery below is of the 14th century octagonal font with a Saxon doorway (not the door) beyond.
The second picture is a view from the nave, through the crossing, to the chancel. The present chancel is Early English, and the south transept was also renewed during this period. The chancel arch is from the Decorated period when it replaced the Norman arch.
St Giles’ Church has several fascinating memorials, the most unusual being the heart shrine shown in the third photograph. The effigy is thought to be of Richard de Cahaignes, and dates from c1270, when Richard died in the Crusades. The figure is of a recumbent Crusader with a lion at his feet. It was often the practice for the mummified hearts of men killed at the Crusades to be brought  back to England for burial in a silver casket at their home church. The casket is probably buried in the masonry behind or below the memorial.
The fourth photograph in the gallery above shows a stone coffin lid, close to the heart shrine on the north wall of the chancel. It is thought to be from the coffin of a Lord Prior of Lewes Priory.
Next shown is the piscina on the south wall of the chancel. Above the piscina is a stone pediment with a carving of a priest holding bread and wine.
The sixth photograph shows the 14th century ‘headless lady’ brass that has been damaged, with a section at the bottom (maybe a depiction of a small dog), and the lady’s head both missing.
The last picture is of the south wall of the chancel showing the arch which led from the chancel to the 14th century Marie de Bradehurst Chapel. The chapel was used as the village school in the early 19th century before it fell into disrepair and was demolished in 1850.

Local resident, Harold MacMillan, rose to become British Prime Mnister from 1957 to 1963 and was made 1st Earl of Stockton in 1984. He died in 1986 at the age of 92 and is buried with his wife, Lady Dorothy Stockton, in the Macmillan family section of the graveyard.

Above left: The MacMillan family area, set in beech hedges in the eastern part of the churchyard. Shown next is the memorial stone of Harold and Lady Dorothy MacMillan (the right hand memorial stone in the first picture).

Above right: This commemorative plaque to the MacMillans is on the north wall of the nave at St Giles’.