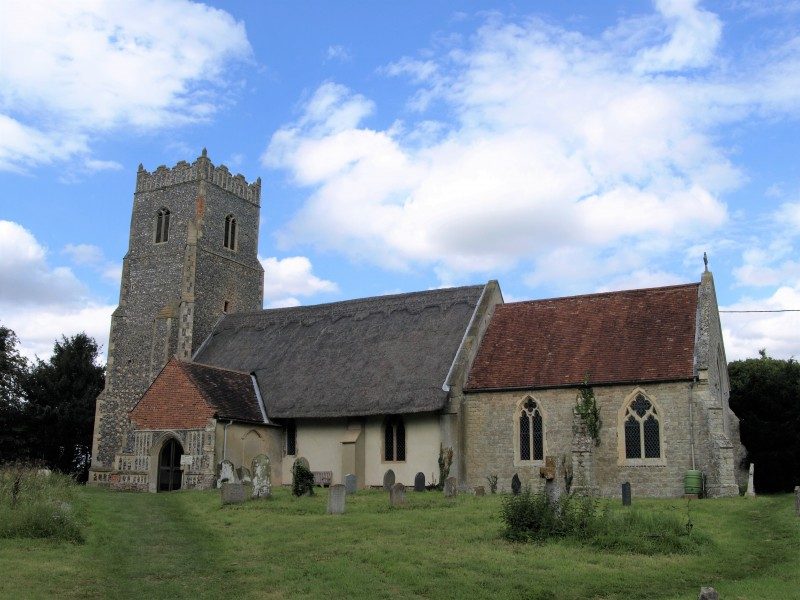 It is generally accepted that this site was the ‘Icanhoh’ named in the Anglo Saxon Chronicle for the year 654 AD where St Botolph built his Saxon minster from which missionary monks spread the Christian faith throughout East Anglia.
After the monastery was destroyed by the Danes in 870 AD, the Christian community erected a stone cross on the monastery site to mark the location for their worship. Soon after, c900 AD, the Saxon wooden church was rebuilt. Archaeological excavations in 1977 revealed the foundations for this wooden building along with Saxon graves under the present nave.
Following the Norman Conquest of 1066 the timber building was replaced by a stone (flint rubble) church. The Norman nave survives, and is evidenced by two blocked slit windows typical of the time.
Also surviving, and a unique treasure now displayed in the nave, is part of the shaft of the stone Saxon cross, pictured first in the gallery below.

The second photograph in the gallery above is of the Norman nave with the 14th century chancel arch which replaced the original Norman arch. Next is a photograph of one of the infilled Norman slit windows in the north wall, seen from outside. The head of the opening is carved from a single stone, a practice which dates the window to the late 11th century.
The fourth photograph was taken looking up into the western tower which was built in the mid 15th century following bequests in 1450 and 1456. Three of the four bells in the tower were cast in 1465, the other in 1507.
Next shown, in the north wall just west of the chancel arch, is the entrance to the rood loft stairs. Before being taken down in the Reformation, the rood loft gave access to the Rood (crucifix) above a rood beam or screen under the chancel arch.
The last photograph in the gallery above is of the 15th century octagonal font. The bowl panels are carved with angels alternating with representations of the four evangelists, below which are angels, and on the central stem, four lions. Both the angels and the lions are found regularly on East Anglian fonts.
The first photograph in the second gallery shows a recess to the south of the chancel arch with a carved cinquefoil head, and containing a framed painting of St Botolph. The recess, originally behind a side altar, probably housed a statue of the saint  to whom the side altar was dedicated.
The next two photographs are of recesses in the chancel. The first, with depressed-head arch, is in the north wall, and has a carved corbel depicting an angel’s head and wings. Opposite this, traditionally in the chancel south wall to the left of the altar, is the piscina where water used at Mass is poured. This one has an unusual octofoil (eight lobed) drain and a trefoil head.
Further reading: The Guide to Suffolk Churches