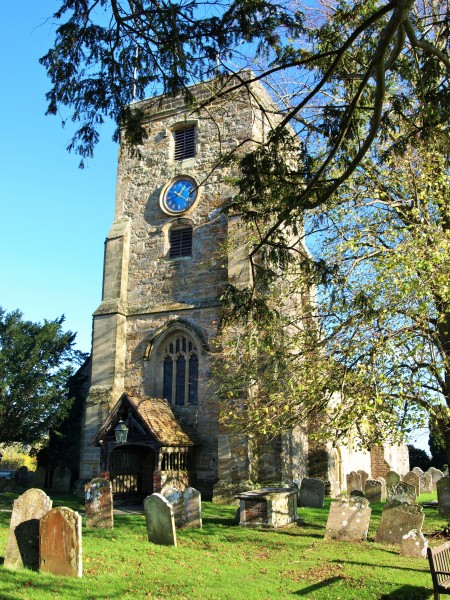 The west tower, shown in the main photograph above was added to St John the Baptist, Kirdford, in the 15th century, and retains a three light Perpendicular  traceried window to the ringers’ gallery.
The original stone church, consisting of a nave and chancel, dates to c1100, but little of this remains after rebuilding in the 14th and 15th centuries.
The first picture in the gallery below shows evidence of the original build in the blocked round Norman arch with nook-shafts and worn cushion capitals, and the Saxon style herringbone masonry to the right of the doorway.

In the 13th century a wide north aisle was added to the nave, with an arcade of three pointed arches. The large oak tie beams in the roof are also probably 13th century. The central one has interesting chevron markings on the underside and a moulded chamfer.

The second picture in the gallery shows the reredos and east window above the 17th century oak altar table. The reredos dates from 1878 and is of Sussex marble. The three light east window is 15th century Perpendicular with late Victorian stained glass, depicting the Crucifixion.
Next is a general view of the nave and chancel looking east. The chancel arch was rebuilt in 1878.

The first photograph above shows a somewhat curious opening to the south of the chancel arch, and behind the pulpit. It has a step within the width of the wall, under a low arch, and was probably a doorway and stairs to a rood loft. It is difficult to picture this, however, especially as the stone pulpit was built in its current position in 1878, replacing a three tier wooden pulpit. There was likely to have been a short wooden staircase leading up to the opening.
The second picture is of the squint to the north of the chancel arch, giving a view of the altar.
Next is a photograph of the octagonal font, which is 17th century, evidenced by an inscription on the font, to two former church wardens, dated 1620. The font is made from Sussex Marble, one of three local resources for which Kirdford is known, the others being glass making  and apple growing. A glass industry flourished at Kirdford between the 14th and 16th centuries, and fragments of this local glass can be found in the north lancet window.
The last photograph is of one of two glass screens installed inside the church entrance to commemorate Queen Elizabeth’s Diamond Jubilee in 2012. The glass is etched with a depiction of an apple tree to reflect the local apple growing heritage.
.