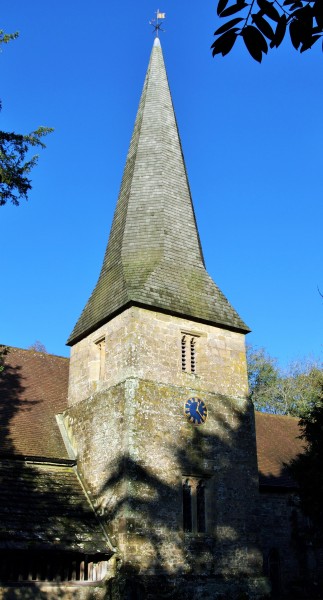 The Church of St Laurence

St Laurence’s Church, Lurgashall stands half hidden at a wooded corner of the lovely expansive green of this archetypal English village.
The spire announces the position of the church through the trees on approach to the village. The first stage of the tower was built in the 14th century, unusually positioned at the south-east corner of the 11th century nave. The recessed upper stage of the tower and the spire are 15th century, built following a bequest of 1454.
There are several indicators of the 11th century origin of the nave, including the tall narrow rere-arch of the blocked north doorway shown in the first picture in the gallery below, and, the section of herringbone masonry on the north wall of the nave, left exposed after stripping of the plaster, (shown in the second photograph). The large amount of ironstone in the nave walls is a further pointer to a Saxon origin.
The first picture in the second gallery is of the unique cloister-like lean-to which was built on the south side of the nave in the 16th century. It provided an area for worshippers to shelter between Sunday services. The eastern end, abutting  the tower, was enclosed in 1622 for use as a schoolroom. On the floor is a huge ’resurrection stone’, formerly used to cover new graves to prevent corpses being stolen for dissection. Also with the resurrection stone are broken pieces of the original late 12th century font.

The second picture shows the chancel, which was rebuilt in the 13th century and then again, in part, in 1731.

Next shown is the chancel/rood screen with, very unusually nowadays, a large rood mounted on it.
The fourth photograph is of the very fine 20th century pulpit. Next is the piscina in the chancel which is probably 13th century, and has a credence shelf, and unusual triangular head.
Last shown is the very unusual square font, dated 1661.  The Sussex marble is carved with alternate raised and recessed squares.
.