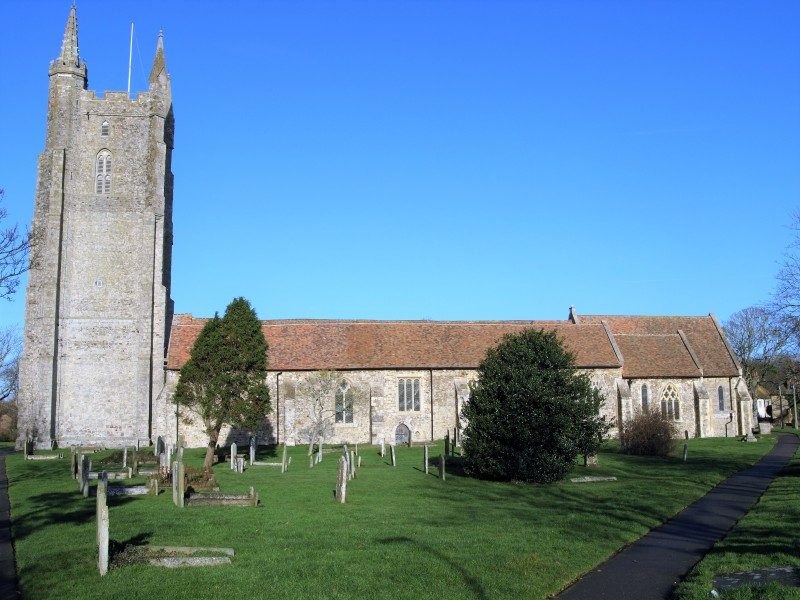 The Church of All Saints at Lydd is the longest parish church in Kent at 61m, and also has one of the tallest towers in the county at 40m high. It is known locally as ‘The Cathedral of the Marsh’.
The eastern half of the nave is 13th century, Early English, whilst the western part of the nave and the tower are 15th century. The latter is crenelated and has a spirulet at each corner.
However, the west end of the north aisle incorporates walling of a much earlier date. This was formerly thought to be the remains of a Saxon basilican church, but excavations in 1966 showed the outline of a larger building of pre-Saxon type with an apse, arcades, and west porch, leading to the conclusion that this was a Romano-British basilica dating probably from the late 5th century. No other Roman basilica of this size, perhaps approximately 40ft externally from porch to apse, has yet been discovered in England.

The first photograph in the gallery below shows the length of the nave with 7-bay arcades, and the fine 15th century king post roof. The next two photographs show the carved corbels which support the roof timbers.

The fourth photograph is of the chancel and east window. This end of the church was rebuilt, in Early English style, after being destroyed by a bomb in World War 2, and is thus in beautiful condition. The 3-light east window dates from 1959 when the rebuilding was completed, and depicts ‘Christ in Glory’.
Next shown is a view of the south chapel, which escaped the World War II bomb. In the chapel, a 13th century trefoil-headed piscina, with rare double bowl, survives.
The last photograph in the first gallery is of the mid 18th century font (decorated for Christmas in the picture). This unusual font is gadrooned (ornamental convex moulding) on the bowl and stem, and is in lovely condition.

A feature of All Saints is the large quantity of fine monuments and brasses. A small selection of these is shown below in the second gallery.
The first shown is a memorial bust to Thomas Godfrey, 1553 – 1623. The ancient Godfrey family of Lydd has several other memorials in the church, including a brass in the nave to the 3 x great grandfather of Thomas, also a Thomas, born 1370 and died 1430. Shown next is a floor slab in the chancel, also commemorating the same Thomas as the bust monument.
The third photograph shows a collection of brasses mounted on the north aisle wall. These memorial brasses include ones to Robert Godfrey, b & d 1516, and John Godfrey.
Next is another floor slab in the chancel, this one inscribed in Latin to Johes (John) Motesfont d 1420.
The fifth photograph in the gallery is of the effigy of Sir Walter de Menyl, Lord of the Manor of Jacques Court, Lydd. Situated in the north wall of the north chapel, under a wide pointed arch with grotesque grinning faces as label stops, the effigy is dressed in chain mail and lies cross-legged with feet resting on a talbot or similar dog. It is believed to date from the 14th century.
Also in the north chapel is an early 19th century headstone with interesting inscription including: Lieu’ Tho Edgar of the Royal Navy d. Oct 17th 1801′;  came into the Navy at 10 years of age;  sail’d round the World in company with the unfortunate Captain Cook of the Resolution.
The final picture is of a fine brass, of an unidentified lady in 16th century dress, that also stands in the north chapel.