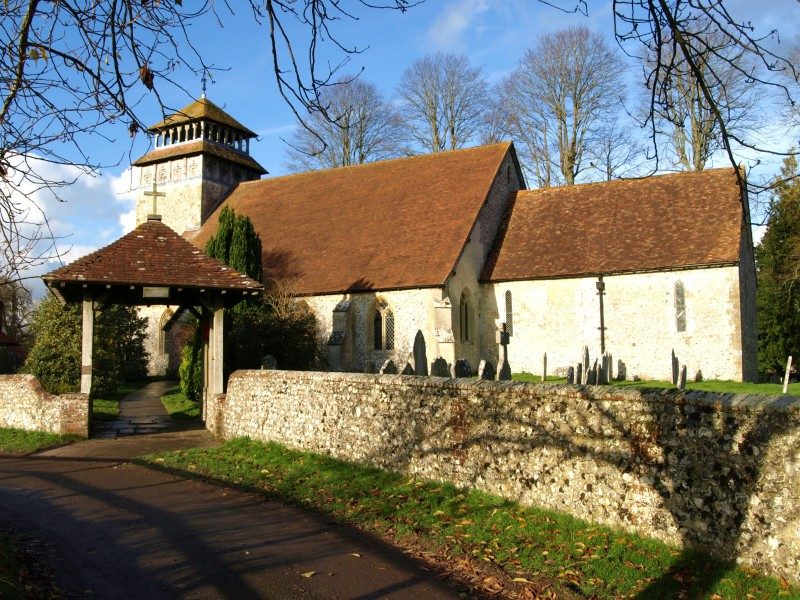 St Andrew’s Church is built on slightly raised ground, avoiding flooding from the nearby River Meon which was formerly wider and navigable.
Construction of St Andrew’s was started in 1230, on the site of an earlier church, mentioned in the Domesday Book, but of which no trace now remains. Unusually, almost all of the church, including the nave, chancel and aisles, survives as built in the 13th century. The tower was rebuilt in the 15th century, and the nave was re-roofed in the 18th century, but the rest of the building is a fine example of virtually unaltered 13th
century Early English architecture.
The nave and chancel, (gallery photograph one) has a typically round Norman chancel arch displaying a somewhat late transition to the Early English style.
The east window is probably early 15th century, as is the roof to the chancel. The 13th century chancel was originally lit by narrow lancet windows in the north and south walls. A 13th century string course runs around the chancel at window sill level. The ornate reredos is Victorian, as is the stained glass.
An original 13th century consecration cross, (shown third in the gallery), is painted on the chancel north wall.
In the Middle Ages, consecration crosses were painted on the church wall to show the spot where, at the church consecration ceremony, the Bishop had marked the church wall by making the sign of the cross with his thumb dipped in Chrism oil (a mixture of olive oil and balsam, also sometimes called holy oil, myrrh, or consecrated oil).
The Purbeck marble and lead font is of late 12th century type, so it may pre-date the church. The central shaft was originally flanked by four pillars at the external corners and traces of these are still visible. The leadwork around the bowl is decorated with trefoiled leaves.