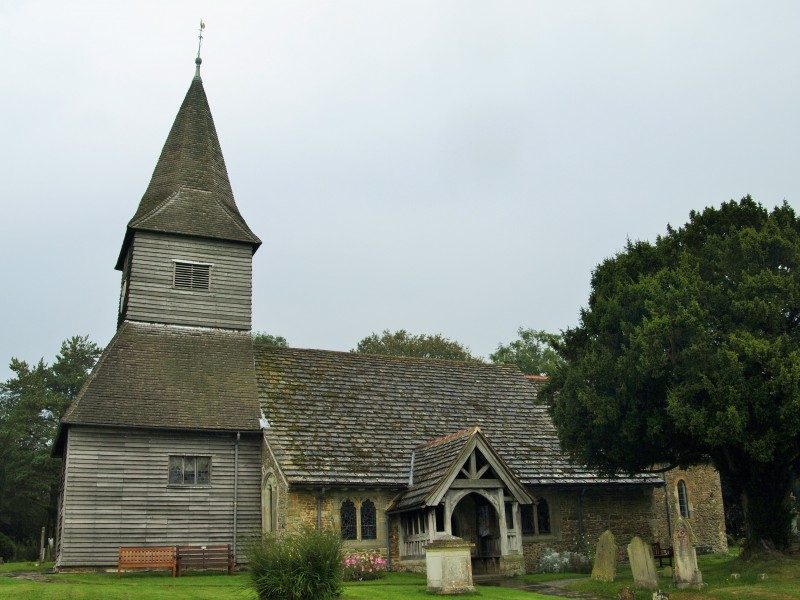 The main photograph is of St Peter’s from the south. The nave and chancel walls are of sandstone rubble with ashlar dressings, and the roof has Horsham stone slates.
The 12th century building, consisting of a nave, chancel and south aisle, was extended in the late 14th or early 15th century when the tower was added. The latter has weather-boarded elevations and a broach spire with wood shingles that were renewed in oak in 1985.
The first picture in the gallery is a view from the nave looking east towards the chancel. The ornately carved chancel screen is just one example of the fine wood carvings at St Peters. Further carving is shown in the second gallery.
The second picture shows the 15th century ogee-head piscina in the south aisle, and the third is of a squint or hagioscope between the south chapel and the chancel. This oblique opening in the church wall enabled worshippers in the chapel to see the main altar.
The gallery above features some of the fine wood carvings at St Peter’s. First, is a closer view of the chancel, showing, at the top, the intricate carving on the chancel screen. Also in this picture is a closer view of the 3-light east window, which has stained glass dating from 1877 depicting the Nativity, the Crucifixion, and the Resurrection. The second photograph is of one of the carved wooden figures of angels which are set on the end of the choir stalls. Next are two examples of wood carvings on the ends of the pews in the nave.
The final picture is of the former carved west gallery front which is now displayed under the tower.
The first picture above is of the parish chest which is made from a single section of oak. It probably dates from the 13th century, and has the customary three locks.
Shown next is the 15th century bell cage with four massive main corner posts 16/17” square, and with double scissor type bracing.
The last photograph is of the late 19th century font, which has arcading to the octagonal bowl.