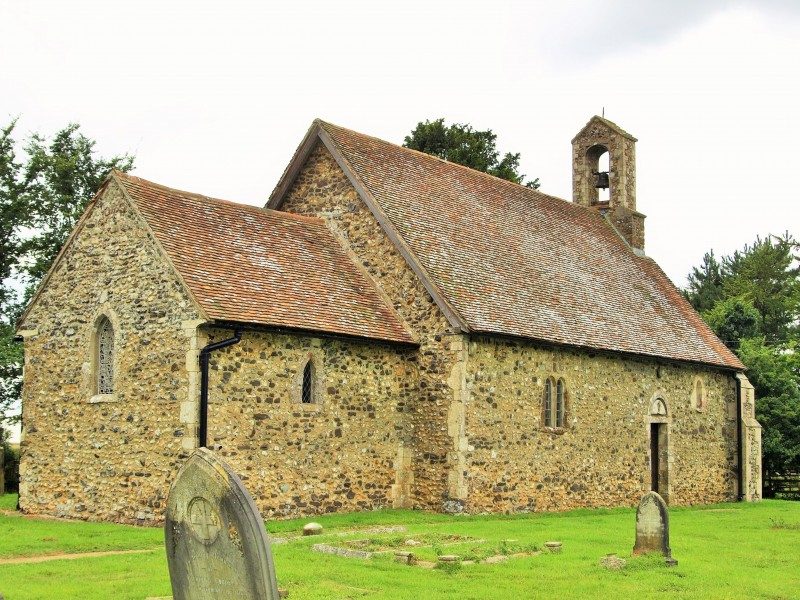 St Oswalds at Paddlesworth is a small two cell Norman church dating from the late 11th or early 12th century. There are north and south doorways opposite one another in the nave.
The main featured image is of St Oswald’s from the north east, showing the plain rectangular north doorway with tympanum over, a small 13th century lancet in the north wall of the chancel, and a two light window in the nave which is probably 15th century.

Shown in the gallery are the two very different doorways. The first photograph is of the plain north doorway, and the second is of the south one. This is a unique entrance which dates from the end of the Norman period, and has unusual door jambs. The right hand one has a slender plain engaged shaft to both the inner and outer sides. The left hand (west) jamb  has a semi-octagonal column with chevrons and a rectangular capital with large corner volutes.

The third picture is of the south elevation of  the church, showing the south doorway, and 19th century stone bellcote. The two small single light windows high up in the nave wall are double splayed and would be original 12th/13th century ones.
Two views of the nave at St  Oswald’s are shown in the gallery.  The chancel arch has a semi-circular  head of small voussoirs (wedge shaped stones), on chamfered abaci. On the nave side of the arch there are recessed angle shafts with scalloped capitals.
The pews are 19th century with carved fleur de lys ends. They are open backed.
An altar recess at the south east end of the nave is shown in photograph 3.  There is a very small hagioscope on the left of the recess, allowing a view of the main altar. The small red light in the centre of the hagioscope is showing from the end of the altar.
The next picture shows one of two small splayed lancets in the south wall of the nave.
The cup shaped font is mid 19th century, but it stands on a high cylindrical base which is medieval.