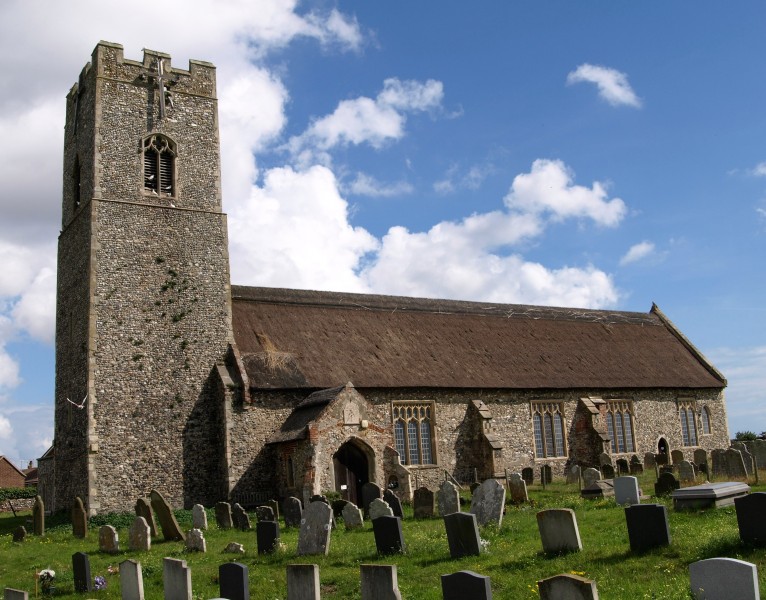 The Church of All Saints & St Margaret

All Saints & St Margaret’s was originally a pair of semi-detached churches, built c1000, on the boundary of two manors. Popular belief is that the Lords of the two manors, Pakefield Pyes and Rothenhale, both wished to build their church with the west end of the building over a large sarsen stone, thereby ensuring that the congregation, when facing the Christian altar, had their backs to the ancient stone which was formerly used as an altar in heathen worship. Hence an agreement was reached to set a dividing wall between the churches on the sarsen stone.
All Saints and St Margaret’s were flint built under thatched roofs, as are many Suffolk churches, the flint and thatching reeds being readily available in East Anglia. The tower was built in the mid 15th century when it probably replaced a round Saxon tower. There is evidence of Saxon herringbone flint work in the north wall near the easternmost buttress.
The first photograph in the gallery is of the church taken from the beach looking up to the east end of the building. The church stands on a part of the cliffs which is lower than adjoining sections, and is also set back a little, making it less vulnerable to the cliff falls which occur in the area.
The second photograph shows the south porch which is 15th century, but incorporates much older carved stonework around the doorway, probably salvaged from around the original entrance door. There is a sundial set on a brick course above the porch door, and an incomplete scratch dial on the nearby buttress.
The third picture is of the end of the above mentioned sarsen stone at the foot of the tower. Unlike any other stones in the area, the sarsen stone would have been deposited here by glacial melt at the end of the last Ice Age, some 10,000 years BC. The difference in colour and texture from local stone would have led to its use as a heathen altar.
Next shown is the nave of St Margaret’s, being the northern one of the two naves. Beyond the rood/chancel screen and above the altar is the modern organ which hides the 14th century east window of St Margaret’s. The next photograph shows the central arcade which was built to replace the dividing wall taken down in the early 15th century, soon after Robert Graunt became the first minister to be rector of both churches. However, after the Rev. Graunt’s death in 1421, the arcade arches were infilled and the churches remained as separate entities for many years. It was not until 1748 that the two churches were officially united as the Parish Church of All Saints and Saint Margaret.
The final photograph in this gallery shows the chancel of All Saints. The east window is 15th century, and the stained glass depicts The Good Shepherd.
The first photograph in the gallery below is of the octagonal font which dates from the 14th century. It is a very early example of typical carved East Anglian fonts, most of which date to the following century. Unfortunately it was badly defaced during the English Civil War by Commissioner William Dowsing who visited over 250 churches in Cambridgeshire and Suffolk during 1643-44 to carry out the Parliamentary Act stating that ” all monuments of superstition and idolatry should be removed and abolished”. ‘Basher’ Dowsing had a particular obsession with angels, and those carved on the font at Pakefield have been severely mutilated.
The second photograph in this gallery is of  the Bowf brass, which is now mounted on the north wall, having been moved there from the nave floor to prevent damage. The brass commemorates John Bowf, d.1417, and his wife Agnes, with their two sons and nine daughters below their feet.
Next shown is an apse-like recess at the back of St Margaret’s. This was originally the top of the spiral staircase down to the crypt which was built when All Saints was extended eastwards in the 15th century. The adjacent doorway between the two sanctuaries gave access to All Saints crypt from All Saints sanctuary.
The final picture shows the pulpit which dates from 1949 and is a replica of one dating from 1767, and the lectern, a replica of a 15th century one at Blythburgh church. In the background are the former rood stairs, the entrance to which is closed for safety.
Further reading: English Thatched Churches