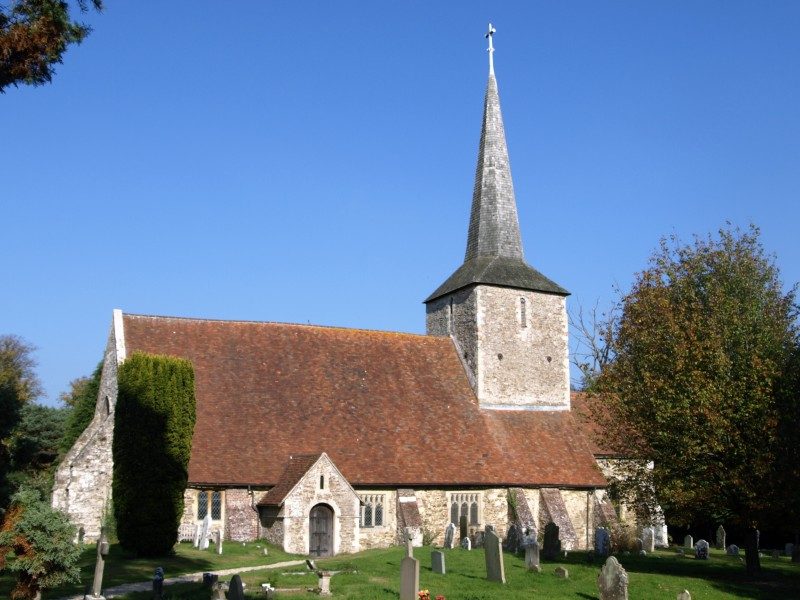 St Michael’s church at Playden dates from the very end of the Norman architectural period c1190, although there had already been an earlier church on the site, witnessed by a record in the Domesday survey of 1086. The inscribed date on the ladder in the tower must refer to the Domesday record as the ladder itself is much later, probably 17th century. The ladder, which can no longer be used due to decay, largely caused by woodworm, is shown in the first two pictures in the gallery below.
The main photograph above shows the tower which is set between the nave and chancel, and has a tall cedar shingled broach spire, and the long sweeping tiled roof which covers the nave and aisles. The building footprint is a variation of the cruciform plan, having north and south aisles extending alongside the tower base, rather than north and south transepts as in the much more common cruciform layout. That the original intention was to have aisles is evidenced by the two small clerestory windows high up on either side of the nave. One of these is shown in the fourth picture in the gallery below. These small round windows were covered when the complete church was re-roofed in the 15th century.
The third photograph in the gallery above shows the fine parclose screen in the north tower arch. Dating from c1310, the oak screen is beautifully carved with ogee heads on slender ringed columns. The delicate tracery over the ogee heads incorporates a hexafoil design.

The first photograph in the gallery above is a view of  the nave looking towards the chancel. In the picture are part of the four bay north and south arcades, of which the one nearest the west on both sides has a pointed arch, whilst the other three have round arches. Despite this, they are of one build, in the late 12th century during the Transitional period when both types of arch were used. Also in this picture are the west tower arch, with the Royal Arms of George III, dated 1787, over, and in the background, part of the former rood screen dating from c1465, now set in the east tower arch at the entrance to the chancel. The second photograph is the view in the opposite direction, looking back from the tower towards the west. The 4 light west window is not original, and now has 19th century tracery above the main lights.

Shown third in the gallery  is the 15th century font. The plain octagonal bowl is supported on an octagonal stem with cusped arcades.

The final two pictures are of windows at St Michael’s. The first is of the only surviving late Norman/Transitional window. The second window shown is in the south aisle, and incorporates stained glass dating from after 1897, depicting St Peter, St Andrew and St James.