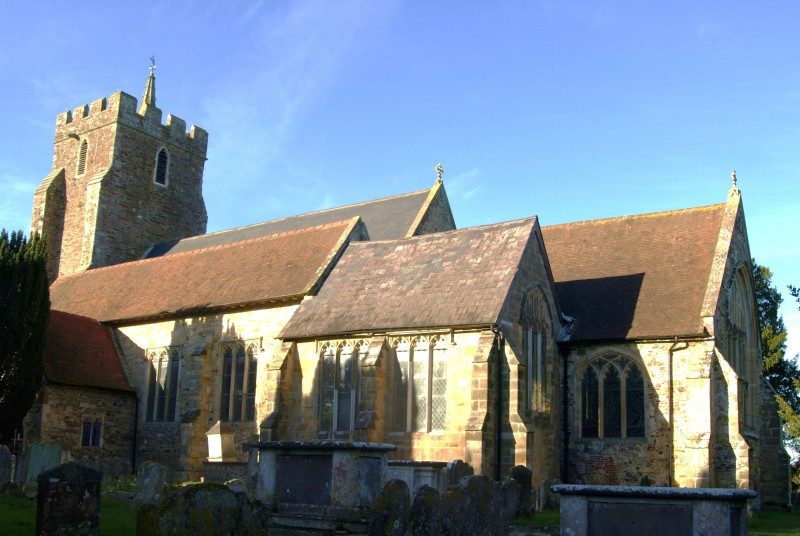 The earliest extant part of St Mary the Virgin Church at Rolvenden is the chancel, sections of which date from c1220, when monks from
Canterbury built the church. On the north side of the chancel, there are two 13th century Early English lancet windows, whilst two remaining columns indicate that there were matching 13th century lancets on the south side of the chancel. The position of these columns show that there were, in fact, three lancets on either side before 15th century alterations were made, and the south chapel was built. Also known as St Katherine and St Anne’s chapel, the south chapel was built in the 15th century, and dedicated on its completion on April 14th 1444, this being recorded on a Brass high on the south wall. In the centre of the chapel floor is a slab covering the grave of Sir Edward Guldeforde, who died in 1449, and was
responsible for the building of the chapel.
When the ownership of the Guldeforde’s estate at Halden passed to the Gybbons family, use of the chapel also passed to them and their successors at Hole Park, the Gybbons-Monypennys.

The chancel east window, (shown in picture one of the gallery), is typical Perpendicular architecture dating from c1472. The original stained glass was replaced in 1830.

The staircase from the entrance of the south chapel, (shown in gallery photograph two), leads up to a most interesting and unusual feature at St Mary’s, the Squire’s Pew/Gallery. This was erected in 1825 as a private pew for the owners of Hole Park, separating them from the main congregation below. It is furnished with Chippendale chairs and a table.
Also showing in the centre of the same photograph is the restored memorial to Robert Gybbon, who died in 1719 and above this, is the chapel east window having stained glass dated 1837, depicting the arms of the Gybbon-Monypennys.

There is a 15th century ‘ogee’ headed piscine  on the south wall of the St  Katherine and St Anne’s chapel where it was used to wash the communion vessels after Mass.

The hexagonal font dates from the 14th century and carries the arms of the Culpepper and Guldeforde families. The wooden font cover is 18th century and could be fastened down to the font bowl to prevent theft of the holy water.