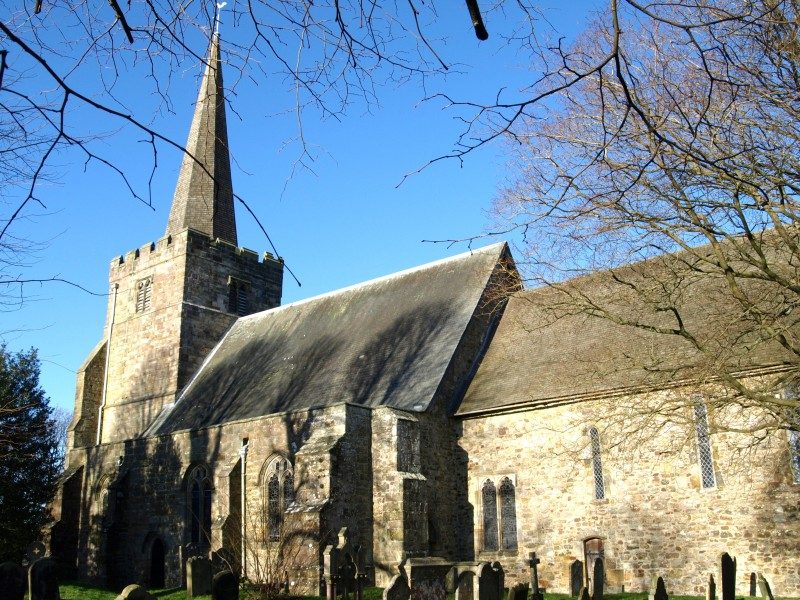 St Deny’s Parish Church Rotherfield is a Grade 1 listed building dating from c1060, evidenced by external Saxon stonework at the north east corner of the church, named the Nevill Chapel after the Lords of the Manor in the 15th century.
The 165 feet high spire was unfortunately destroyed in the hurricane of October 1987.  It was replaced with a new steel framed spire, lifted in place by helicopter, and clad with chestnut shingle tiles.
Gallery photograph one is of the eastern end of the chancel with the intricately carved reredos behind the altar. The large 14th century perpendicular style east window is glazed with late 19th century pre-Raphaelite stained glass.
Picture two shows a gleaming polished brass lectern, and the pulpit, which was made in 1632 for the Chapel of the Archbishop of Canterbury at Bishopsthorpe. By 1896 it was no longer required there and was transferred to St Denys. It is carved from oak, and the canopy is decorated with salamanders, acorns and oak leaves.
Remains of the cross from the top of the spire destroyed by the Great Hurricane of October 16th 1987 are mounted and displayed to the right (south) of the pulpit.
The yew tree in the churchyard managed to survive the storm. It is virtually hollow, supported by numerous poles and hawsers, and thought to be at least 1500 years old.

St Deny’s, Rotherfield is renowned for its wall paintings, the earliest of which date from the 13th century. They were exposed during renovation works in 1893, after having been obscured under redecoration for several centuries. It is likely that there were originally paintings throughout the church, but many have faded badly since being re-exposed. However, there are still some that are quite clear, particularly on the chancel arch and in the Neville chapel.
Photograph two in the gallery above is of a 14th century mural at the side of the chancel arch depicting St Michael weighing souls. A mural painted above the chancel arch is a 15th century depiction of Jesus seated on a rainbow with His feet on an orb, representing His dominium over earth, air and water. The sun and moon are above His head, and on either side are angels with trumpets. To the left of Jesus is the Virgin Mary, and to the right is St John.

The octagonal stone font has its own story to tell. It dates from the Norman period, but was discovered in a field near the village in the late 19th century where it was being used as a cattle trough. The rector at the time arranged for it to be returned to the church. Circumstantial evidence regarding removal of the font from the church does perhaps point to one Samuel Wickens who was a church warden from 1814 to 1818, and was also the tenant farmer using the field in 1816.