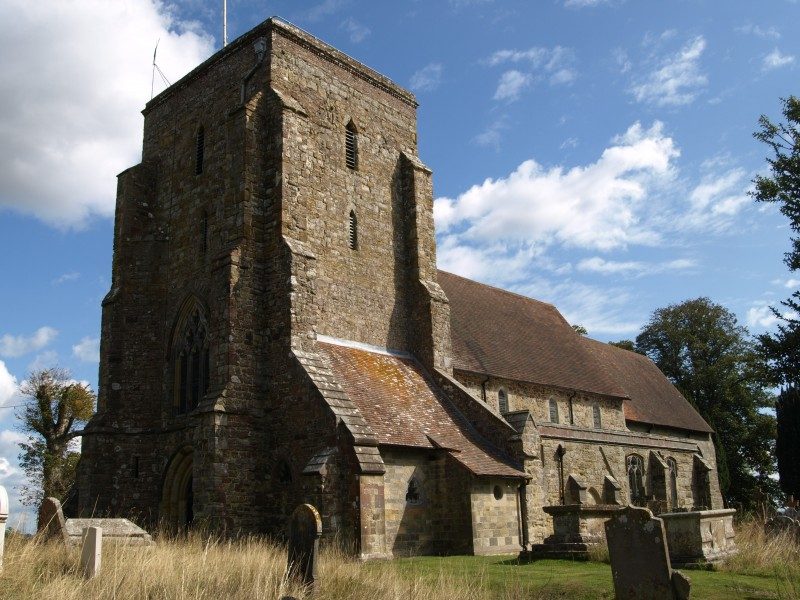 The Church of St Nicholas, Sandhurst is in a beautiful position on high ground with views south across the Rother valley, and north and west across the Weald, with the unusual 5 sweep Sandhurst windmill on the horizon.
As with most Weald churches, St Nicholas Church was built with local sandstone. Much of the building dates from the 14th century, although there is evidence of 13th century work, particularly in the nave where the clerestory lancets are of this earlier date.

The first photograph in the gallery is a general view of the nave and chancel. Either side, below the easternmost clerestory windows, are arches to the 14th century north and south aisles. The chancel arch was rebuilt in 1875.
The second picture in the gallery is of the south window in the south aisle. This window has fragments of 15th century glass moved from the north aisle in 1929. The adjacent east window also has glass dating from c1450, and depicts St Michael the Archangel weighing souls.
The final picture is of a south doorway to the nave, blocked in 1875 when the north porch was built. To the side is a holy water stoup, used to make the sign of the cross, with water blessed by the priest, upon entry to the church. This would have been the original entrance to the church, the stoup therefore dating to the 13th/14th centuries.
At the entrance to the (north) Chantry Chapel is a good example of a Rood staircase, which, pre-reformation, led to the Rood loft.
The sandstone font is 14th century, and is decorated with window style tracery. There is a well restored 14th century aumbry in the chancel.
The list of vicars at St Nicholas includes an item of special interest to the webmaster, whose 7x great grandfather, the Rev Charles Maude was the incumbent from 1696  to 1722.