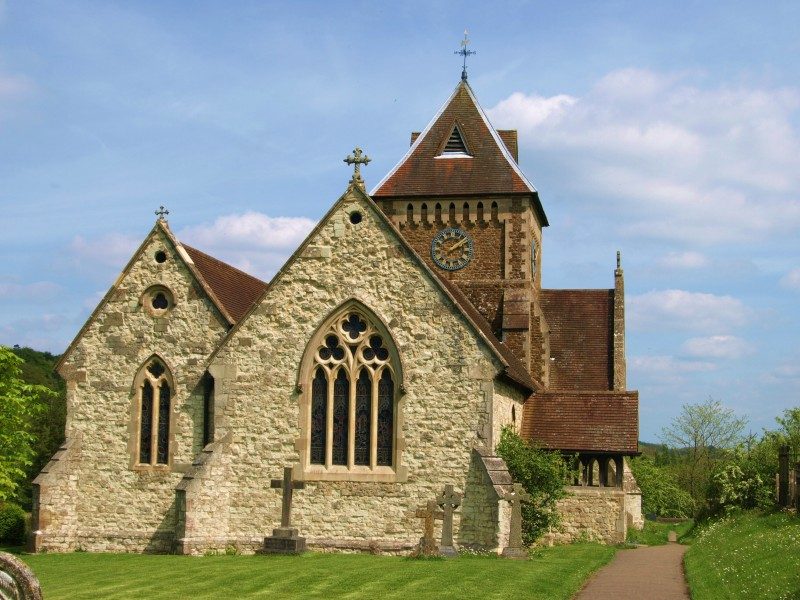 This pretty little church was rebuilt between 1861 and 1873, sympathetically retaining its medieval character, and incorporating some Norman features.
The main walls are of green sandstone and coursed clunch, a chalky limestone rock used for building in south-east England and in Normandy.
The church has a cruciform plan, with the central crossing tower being constructed of Bargate stone, a very durable sandstone with a warm yellow tint caused by iron oxide in its make up.
The tower has a clock face on all four sides, is finished with a tiled pyramid spire, and has a stair turret at the south-east corner
The first photograph in the gallery above is of the 15th century porch which was retained in the Victorian renovation. The entrance door is Norman.
Next is a view through the crossing towards the chancel. The chancel east window is in Early English Gothic style, with pointed arch, and tracery which was introduced towards the end of the Early English period.
The third photograph is of an oil painting of the Madonna and Child, used as an unusual backdrop to the altar. It is from the school of the Venetian artist, Cima de Conegliano. Cima was an Italian renaissance painter born in Congliano c1459. He later worked in Venice specialising in religious scenes.
The first picture in the gallery above is of the square stone font which is Norman, 12th century. It has chamfered corners and short support pillars. Shown next, the pulpit is modern, but is nicely finished with turned balusters.
The third picture is of clarinet mounted on the church wall. It was formerly used by the church choir.
The inscription reads: Before the Reformation the minstrels gallery at (the) west end (removed in the alterations of 1860) was occupied by an instrumental orchestra as choir. It was known as ‘The Lofte’ and (was) fitted with tiers and rests. This clarinet was used by one of the last musicians – Mrs Chufer (9 Walnut Tree Place) whose husband played the flute. It was presented to the church by Mrs de Wend whose brother Dr H D Chester obtained it from the nephew of the Chufers.