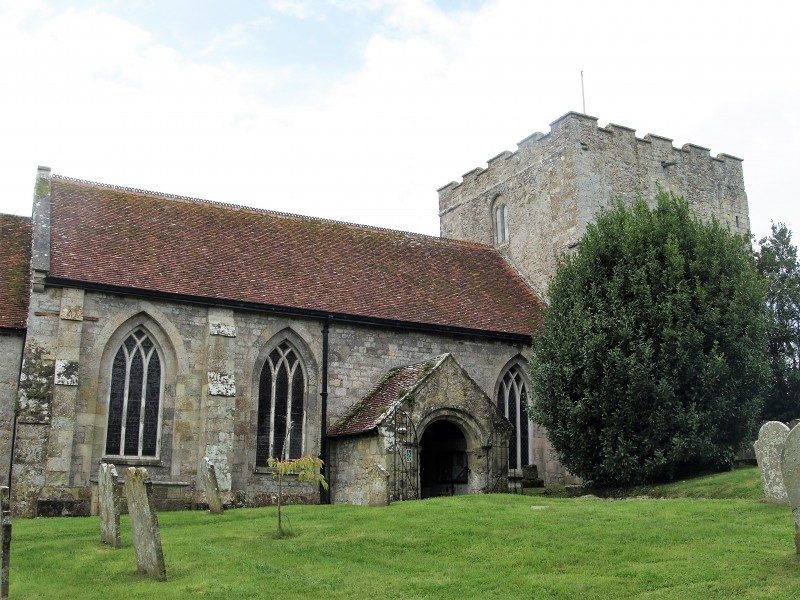 The Church of St Michael the Archangel

A  Norman church was built at Shalfleet between 1070 and 1086 when it was recorded at the Domesday survey of that year. The land on which the church was built had, however, been a Christian site long before the Conquest of 1066. No evidence of a wooden Saxon church remains , but archaeological excavations in 2003 and 2005 uncovered the remains of Christian burials proved by carbon dating to be from the late 7th or early 8th centuries, soon after the Isle of Wight peoples were converted to Christianity in AD 686.
The earliest extant part of the church is the tower, built c1070 with 5 ft thick walls, a crenelated parapet, and no access at ground floor level, to provide a safe refuge for local inhabitants when threatened by attack from raiders using the then navigable Newtown River.
The Norman nave was built in the first half of the 12th century, and the north doorway with unusual tympanum survives from this time. The first recorded rector, in 1133, was one Peter de Norton.
The 13th century saw significant changes to St Michael’s, with a south aisle being added c1270, and a chancel c1290. Also at this time a wide arched opening was made between the tower and the nave, an action which subsequently caused serious subsidence and led to the necessity to block the opening and to build a buttress at the south-west corner of the tower.

The first photograph in the gallery below is of the north entrance doorway. The door itself is dated 1754, but the arched opening is 12th century Norman and features a tympanum with unusual carving of a bearded man with outstretched arms above two animals. This perhaps depicts Adam naming the animals in the Garden of Eden, although alternative interpretations have been suggested.
The second photograph is of the south wall of the south aisle with two 13th century 3-light windows which have very unusual, possibly unique, oval tracery.
Next shown is another view of the south aisle, this one looking towards the west wall. The columns and arches of the south arcade are finely carved from Purbeck stone.
The fourth and fifth photographs are of the chancel arch and screen looking in opposite directions. The screen was erected in the early 20th century in the position where a rood screen would have been before the Reformation.

The first photographs in the second gallery are of three of the stained glass windows at St Michael’s. The first one is the War Memorial window located at the eastern end of the north wall of the nave. It was installed in 1920 and depicts St Nicholas, patron saint of sailors, and St George, patron saint of soldiers, the two flanking Christ in the centre light. Next is the ‘Wyndham Cottle’  window in the east wall of the  chancel. The stained glass depicts St Luke, Christ healing the sick, and Christ as the Good Shepherd, being references to Dr Cottle’s profession as a physician. The third window, which is in the south wall of the chancel, shows the Nativity. It was installed in 1888 in memory of the Pennethorne family.
The last two photographs are of the pulpit and the font. The oak pulpit dates from the Carolean era (Charles I) in the first part of the 17th century, and the font has a circular bowl which is from a little earlier, towards the end of the 16th century.