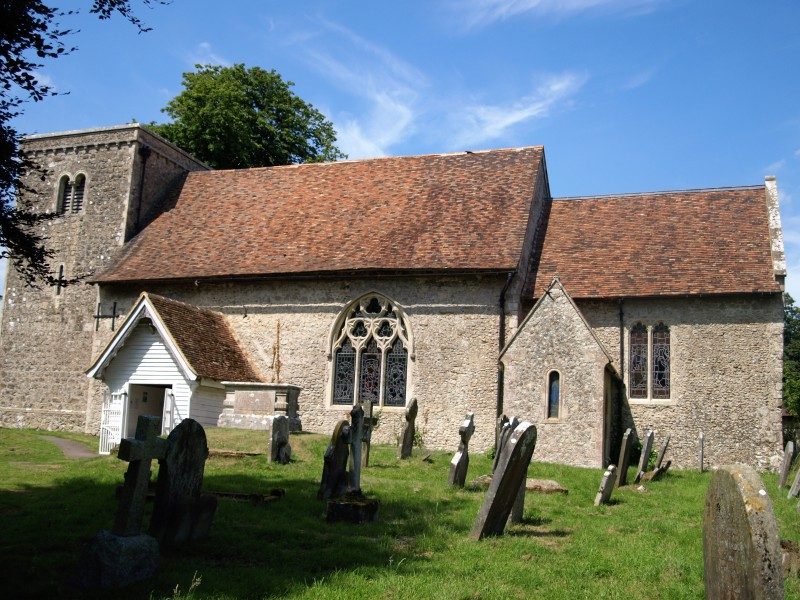 The nave, chancel, and lower parts of the tower, at St Mary’s are Norman, probably late 11th century. The tower was sympathetically restored in 1881, incorporating typically Norman features such as the semi-circular west doorway arch with zig-zag moulding, and the triple nook shafts.  Also included are Norman style double bell openings, and a corbel table below the parapet.
In the 13th century, a north aisle and Brabourne (north) Chapel were added, and in the 15th century a south porch, with weatherboard cladding, was built.

A feature of St Mary’s Church is the stained glass. The chancel east window has modern glass, installed in 1966, depicting Madonna and Child. The third image in the gallery shows the chancel south window, the two cinquefoil headed lancets having glass depicting St Mary and St John. The next photograph in the gallery is of the beautiful ‘Window of the Resurrection’, also known as ‘the Butterfly Window’. It was installed, to the left of the entrance door, to mark the Millennium. Alexandra Le Rossignol designed and made the beautiful stained glass.

Other interesting items at St Mary’s are encaustic* floor tiles in the chancel, and monuments in the chapel. The Priscilla and Mary Scott monument was erected in 1654 and shows the two figures in unusual pose, leaning on a central prayer desk. It is made of black and white marble. Also in the north chapel there is a 15th century cusped tomb recess, with a pieced quatrefoil frieze over a depressed arch.
*Hand made tiles with pattern made by combining pigments with hot beeswax.