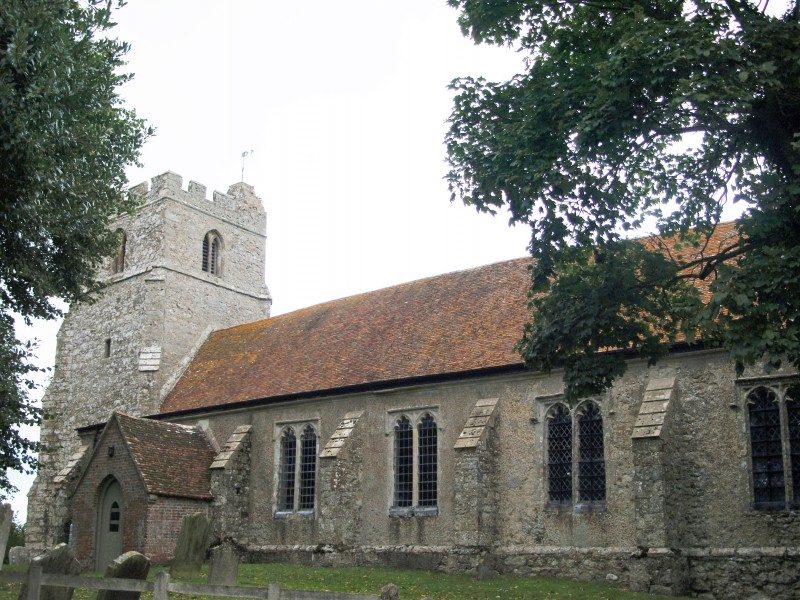 The earliest extant part of St Dunstan’s is the nave which was built just after the end of the Norman period, c1200, in Early English style. In the mid 13th century north and south aisles were added, with 4 bay arcades. The pointed arches have 2 chamfered orders and are supported on circular piers with ‘bell’ capitals and bases. The north arcade appears to be a little later than the south, and is slightly longer.
The church was extended eastwards in the 14th century forming a chancel, and north and south chapels with 2 bay arcades.
Early in the 15th century, perhaps as early as 1400, the tower was built at the west end of the nave. It has two stages, the top one with 2-light belfry windows, and crenellations above a second string course. There is a north-east stair turret with small rectangular openings to light the stairs.
The first photograph in the gallery below shows the tower and stair turret.
The second picture in the gallery shows the view in the nave looking eastwards. There is no chancel arch, and this, together with the open arches of the north and south arcades, gives an impression of spaciousness to St Dunstan’s. The east window has three cinquefoil headed lights, with a late 19th century quatrefoil light over.
The third photograph shows the west end of the nave, which is dominated by a very tall 15th century tower arch. The west window is also 15th century, contemporary with construction of the tower.
Above, in the gallery, the first picture shows a historically important wall painting dating from c1500. The painting, in red ochre, is on the north aisle, north wall. It is an accurate drawing of a ‘Great Ship’, a successor to a ‘Carrack’, with four masts, a forecastle, and half and quarter decks, built in the period 1480 to 1520.
The second photograph shows the Rood loft doorway in the south wall of the north aisle where it adjoins the north chapel. A section of the stone stairs remains, as do the door hinges.
The next photograph is of the 13th century square font. It is set against the west pier of the north arcade, on two stone steps, and still has its original lead lining. Next to the south side of the steps, in the nave floor, are some medieval encaustic tiles, dating from c1485.
Shown next in the gallery is a section of the north aisle north wall with a blocked doorway. Either side of the doorway are lead plaques made from lead sheet salvaged from the roof during renovations. Both plaques are inscribed with the names of the church warden, J Bourne, and of the plumber, J Warrington. The left hand plaque is dated 1773, whilst the right hand one has the additional information ‘T Apps, Carpenter and all his jolly men, and is dated 1780.
Above, the first photograph is of the nave roof, showing four of the five tie beams and crown posts, which date from the 16th century. The second picture is of the north aisle roof which is much older, dating from the 14th century. It consists of common rafters with collars and sous-laces (collar braces), and massive tie beams. The tie beams have been strengthened with metal straps to alleviate the problems of splitting over the course of hundreds of years. Centre bosses on five of the tie beams are carved with motifs relating to former landholders in the area.
The final photograph is of a 14th century table tomb in the easternmost arch of the chancel north arcade. Brass inscriptions on the corniced lid are missing, probably removed at the Reformation. The tomb has a moulded plinth, and panels on the sides with quatrefoil designs.