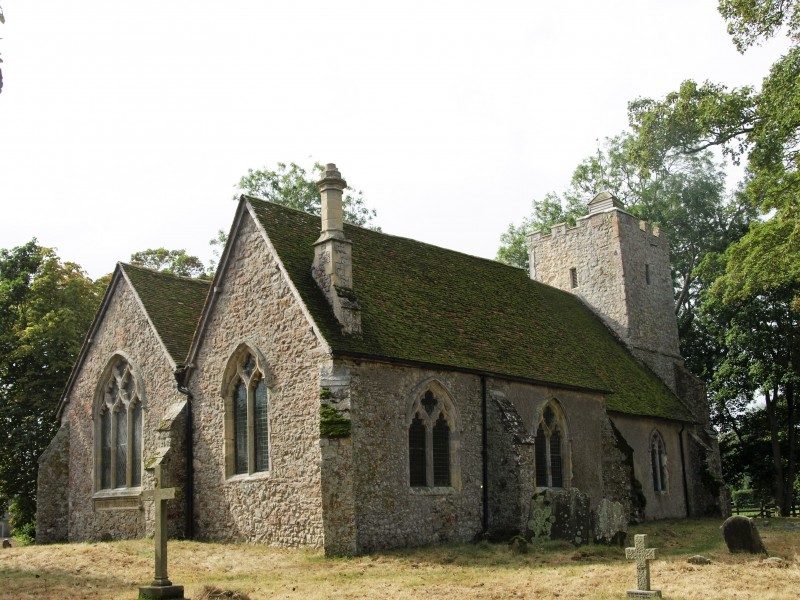 St Augustine’s at Snave is tucked away up the driveway next to Manor Farm, and then along a wide grass track. There are just a handful of houses at Snave, so it is no wonder that the church was eventually declared redundant, although it is still consecrated and held a Latin Mass in 2015.
The church is under the care of the Romney Marsh Historic Churches Trust. It is now entered through the north chapel via a small doorway in the west end of the chapel. The building is largely 13th century, built of roughly coursed stone with a plain tile roof. The two stage tower, with battlements, was added in the 14th or perhaps early 15th century. The north chapel and the chancel were altered in the 14th century, and a general Victorian renovation was carried out in 1873. The south porch was also added in the 19th century, as was the stone chimney stack to the north chapel, when a fireplace was installed to heat the chapel (then being used as a schoolroom).
The first picture in the gallery above shows the view through the chancel arch to the nave and tower arch. In the foreground is the 14th century chancel arch, the head of which has been renewed. The nave roof has three tie beams and king posts, and there is a moulded cornice running round at eaves height.
The second photograph shows the south wall of the chancel with 15th century sedilia and piscina. The former has a cinquefoil arched head under an unusual crested cornice, and there are ‘vestigial’ arms to the moulded jambs.
The third picture shows the 13th century arch which leads to the north chapel from the nave. The two are divided by a carved screen probably dating from the 19th century when it was installed to separate the schoolroom area from the main body of the church. In the right foreground is the pulpit which dates from 1858, and over the arch are the 1735 Royal Arms.
The first picture in the gallery below is a closer view of the recently restored Royal Arms of King George II.
The second photograph shows the Victorian octagonal font, and the third photograph is of sections of the former medieval font, which are kept in the church at the west end of the nave. These pieces are probably from the original 13th century font.
The next photograph is of the chancel and chapel arches viewed from the nave. Also in the picture  is the 14th century chancel roof, which is of crown post construction, and boarded.
The fifth picture in the gallery is of a carved slab set into the north nave wall. It features a skull, cross-bones and farm working tools including a scythe, but there is no associated ‘in memoriam’ or the like.
The final picture is of the Victorian fireplace in the north-east corner of the north chapel. It was installed when the chapel was used as a schoolroom.