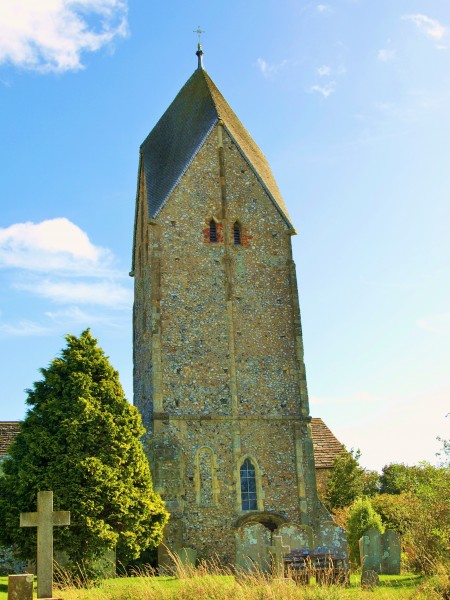 St Mary the Blessed Virgin church at Sompting sports a Rhenish helm spire which is unique in England. The square tower is finished with four steeply pitched gables, making the four sides of the spire rhomboid in shape. As the name suggests, similar Rhenish helm spires are found on German churches in the Rhine area.
It appears that the lower section of the tower is Saxon, whilst the second stage was built post-Conquest. The two stages are separated by a string course, above which the long and short stones of the pilasters differ in section from the lower ones. Other material and architectural details seem to confirm that the two stages were built at different times. Dating is further complicated by later alterations. The Rhenish spire probably dates from the 14th century, when the gables were rebuilt.

Unusually, there is no chancel arch leading from the nave to the 12th century  chancel. The canopied tomb chest of Richard Burré, who died in 1528, is along the north chancel wall. The chest has large quatrefoils, and the backdrop above, has an angel holding a shield which is quartered for the arms of leather sellers, goldsmiths and fishmongers, and those of the Tregoz family. The two light window above the tomb has 1889 glass depicting the Adoration of the Magi.

St Mary’s has a baptistery which is actually a small extension to the 12th century south transept.  The 12th century round font stands on a pedestal below a transitional Norman window of c1190 with Victorian glass depicting the Good Shepherd. The south wall of the small baptistery has a 12th century lancet window with stained glass, installed in 1884, depicting the Angel of Praise. The semi-circular headed aumbry below the window has an embroidered banner showing bottles of the three sacramental oils viz catechumens, chrism and sick.  The Oil of Catechumen was used in baptisms, Holy Chrism for confirmations, and the Oil of Sick for the infirm.

An Early English sculpture is mounted in a blocked doorway in the north wall of the nave. The sculpture consists of re-used stones with Saxon carving on the side which now faces west, whilst the east side is carved with Christ in Majesty in a double mandorla, and with symbols of the four evangelists in the corners.
Also of interest is a fine 12th century limestone bas-relief depicting a Saint, possibly Wilfrid, seated at a reading desk, and with his staff behind.
A grotesque face is carved on a corbel on the east wall of the late 12th century north transept, originally a private chapel for the Knights Templar on whom the advowson was bestowed in 1154.
Further carving can be found on the tower arch column imposts, the centre one being carved with leaves, and the outer ones having volutes with seed centres. This is original or perhaps reused Saxon masonry.