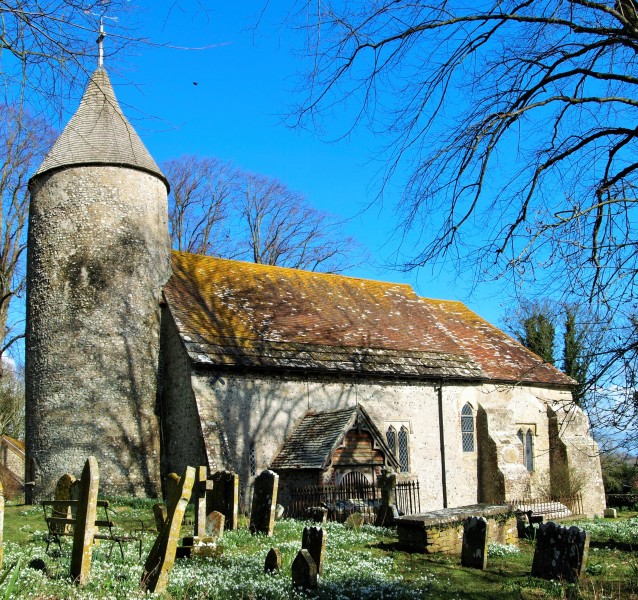 A copy of a royal charter inside St Peter’s church entrance door, confirms that, in AD 966, King Edgar the Peaceable granted Southease, including the church, to the Benedictine monks of Hyde Abbey, Winchester. The present church consists of a nave and an unusual round tower, the latter dating from the mid 12th century, but the original chancel and aisles have been lost. Excavations revealing the foundations of a porticus, a feature more common in the Saxon era, indicate that the nave is probably of early 11th century build. This is further evidenced by a small blocked round-headed window, and a short length of cornice, both in the north-east corner of the nave, and both of which appear to be
pre-Conquest.
The original chancel and aisles/transepts were removed, probably in the mid 14th century at the time of the Black Death. The blocked arches to the transepts remain, and a new chancel was formed by the addition of a rood screen, later replaced, after the Reformation, by the current wood and plaster chancel arch.
To the left of the late 18th century organ is a Norman window (shown in the gallery below).

The plastered walls above the timber chancel arch are decorated with late 17th century paintings. The traditional reddish brown colours used blend well with the much earlier murals on the north and west walls of the nave. The chancel arch paintings are of biblical texts, unfortunately incomplete, and cherubs.
The three-light 14th century east window has 19th century glass depicting the Good Shepherd. A square headed early 15th century window, with two ogee headed lancets, is built into the blocked arch which originally led from the nave to the pre Conquest south aisle/transept.

The square font has attached round corner shafts. It dates, probably, from the 12th century, but has subsequently been restored.